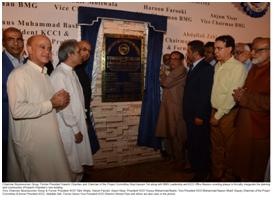 Speaking on the occasion, Siraj Kassam Teli paid glowing tribute to all BMG supporters who continued to exhibit complete unity with the Businessmen Group even during difficult times. He also appreciated the overwhelming support and cooperation being extended by Vice Chairmen BMG Tahir Khaliq, Zubair Motiwala, Haroon Farooki and Anjum Nisar who never said no on any occasion and always supported his decisions. “I am very grateful to all of them and I am very thankful to Almighty Allah for bestowing such sincere friends and colleagues”, he added.

Chairman BMG further stated that it has been 19 years of BMG at Karachi Chamber and during this period, 24 BMGIANs took charge as President of this highly esteemed Chamber whereas the same number of BMGIANs also took over the Offices as Senior Vice President and Vice President. Moreover, around 250 BMGIANs were elected as Managing Committee members who efficiently served the business and industrial community. All this became possible only due to the trust and overwhelming support by the business and industrial community of Karachi, he added.

Highlighting the overall journey undertaken since 1998, Siraj Teli recalled that talks continued for setting up Karachi Chamber’s new building at a suitable location even prior to 1998 when Businessmen Group took control of Karachi Chamber’s management but nothing as such was materialized in this regard.

“Since day one when BMG was formed, we all committed ourselves to avoid unnecessary or unwarranted expenditures and vowed to utilize funds only on those initiatives which are in the interest of Karachi Chamber and its member.  Subsequently, numerous  new schemes including revision of fee, commencement of My Karachi Exhibition, publication of Economic Horizon magazine and other income-generating initiatives were taken, which resulted in saving a substantial amount of Rs500 million during the last 19 years and led to purchase of this plot from KCCI’s own financial resources”, Siraj Teli added. He informed the audience that during the quest to look for a suitable location, many locations were reviewed and finally, this plot in Clifton was purchased after fulfilling all the legal requirements and paying taxes. “Every single rupee for purchase of this plot has been paid officially and transparently”, he reiterated.

He said that the Karachi Chamber still holds around Rs80 million to Rs100 million funds in its bank accounts and they will be able to save more in the next couple of years which will be utilized in the construction of KCCI’s new building.

Briefing the audience about building plans, Siraj Teli stated that KCCI’s Building maps, which have been displayed at the plot today, were not final but they will be improved further after taking suggestions and inputs from all the stakeholders who were present at today’s plaque unveiling ceremony. He said, “Four architects were approached for this project, of which two architects presented their maps whereas work of one of the architect is displayed today and even these maps have been revised at least five times as per requirements. It is our target to construct the best possible building within the available resources for the facilitation of members.”

He requested the members of business and industrial community to give their valuable inputs and suggestions in writing or via email after reviewing the existing maps of Karachi Chamber’s proposed building which will be given due consideration. It will require at least 3 to 4 more months to finalize the plan for construction of KCCI building.

Chairman BMG categorically stated that BMG strictly works under the motto of ‘Public Service’ and they have tried their best to serve the entire business and industrial community of Karachi during the last 19 years. “We have never made any dishonest move, never attempted to suppress anyone’s rights and never allowed anyone to misuse Karachi Chamber’s funds”, he added.

“May almighty Allah gives us the strength and courage to construct this building in the next 3 to 4 years so that the entire business and industrial community remembers that this building was constructed by the Businessmen Group whose leadership made tireless efforts for business community’s rights”, he added.

Sharing the details of initial plans, Siraj Teli said that the building will comprise of ground plus mezzanine and 1st floor along with two basements with a parking capacity of 150 cars and utility services rooms. The Ground floor will be the Executive floor where offices of President, Senior Vice President, Vice President and Secretary General will be established whereas a Meeting Room for call on meetings and a Managing Committee room with a capacity to incorporate 60 members will also be constructed. He said that the mezzanine floor will cater to public dealing where membership, attestation, visa, PRO and Media Departments will be established while the first floor will have Secretariat, R&D, IT and Accounts departments etc.