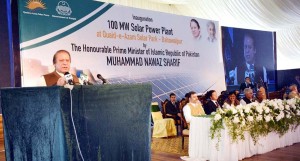 The 500-acre solar power park for the plant has been set up by the Punjab government with Chinese assistance in 11 months at a cost of Rs 15 billion. It went into trial run last month and is now providing 100MW to the national grid.

The park’s generation capacity will be raised to 1,000MW in two subsequent phases. Work on the next phase has been launched and is expected to be completed by next year. On completion, the plant will become one of the major solar power projects in the world.

Speaking on the occasion, the prime minister said that overcoming energy crisis and eradicating terrorism and poverty were priorities of his government, and the electricity crises would be ended by 2017-18.

Work has been undertaken on several major projects to end loadshedding and 2,000MW will be generated by the coal-fired Thar power project and 1,320 MW by a similar project in Sahiwal.

He congratulated Punjab Chief Minister Shahbaz Sharif and his team for completing first unit of the solar plant ahead of the schedule.

He said 800 people would get jobs at the solar park. He also said that Tamgha-i-Khidmat would be conferred upon the plant’s Chief Executive Officer Syed Najam Shah for speedy completion of the project.