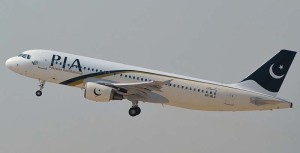 Chairman PIA Nasser NS Jaffer, Managing Director PIA, Shahnawaz Rehman and senior officials of the airline were present at the airport when the aircraft arrived.

Chairman PIA, expressing his views on the arrival of the A-320 aircraft, thanked the Prime Minister Muhammad Nawaz Sharif and Special Assistant to the Prime Minister on Aviation, Shujaat Azeem, for their support and cooperation in the revival of PIA and in particular the airline’s fleet expansion.

He said that with the induction of fuel-efficient aircraft, the airline will be in a better position not only to offer additional flights to its passengers but also improve the flight schedule of the airline. He said that the aircraft will be put into operation on medium haul international and domestic routes.

PIA is in the process of undertaking a revival plan and is acquiring latest, state-of-the-art aircraft. The fuel efficient Airbus A-320 will greatly benefit PIA in terms of fuel efficiency and savings.