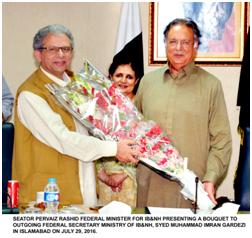 Minister for Information, Broadcasting and National Heritage (IB&NH) Senator Pervaiz Rashid on Friday while appreciating outgoing Secretary Information Syed Imran Gardezi said that he was a very efficient and honest officer who was retiring from the service with respect, honour and dignity.

Addressing the farewell meeting by the media chiefs  held in honour of Secretary IB&NH, who is due to retire on  July 31  here, the minister said that it was indeed fortunate  that  such an officer was in charge of his ministry on  whose integrity nobody could dare raise a finger. The Minister said that the secretary IB&NH kept transparency in running the affairs of the ministry and as a resultthe ministry also benefitted. The minister expressed the hope that his successors will follow the precedent set by Imran Gardezi.

He also expressed best wishes for the outgoing secretary for his life to come. The minister emphasized the need to train and equip the officials of Ministry of IB&NH with the latest trends of the modern day media. He said the ministry officials should learn the new tools and mediums of media to cope with the requirements of new times. The Secretary Information said that he is grateful to the Minister who has always supported merit in the ministry. He noted that the political support from the leadership improved performance of the organizations in the ministry. He thanked the minister and his fellow colleagues for their words of appreciation for him.