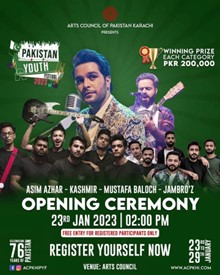 The 7-day Pakistan Youth Festival organised by the Arts Council of Pakistan will be inaugurated tomorrow afternoon by well-known comedian Anwar Maqsood and the President of the Arts Council, Muhammad Ahmad Shah, will also be present on January 23.

On the first day of the Youth Festival, singers Asim Azhar, Kashmir Bend, Jambers and Mustafa Baloch will unleash the magic of their voices.

In the festival, auditions will be taken various fields, including essay writing, painting, photography, dance, singing, acting and Urdu elocution competitions are included. At the same time, the Pakistan Youth Festival will be officially inaugurated by well-known writer and comedian Anwar Maqsood at 3:30 pm in June Eliyalan.