All is not lost; there is light at the end of the tunnel. There is resolve from the federal and provincial governments to get the power sector back on its feet, 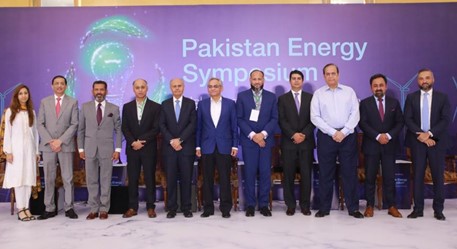 “There is a critical need to look at and reevaluate the policies that impact the energy sector. Over the years, we have heard many issues and their solutions, but these are all supply centric; today, we want to break this and take a detour,” he said.

“Instead of a supply centric approach, we want to focus on consumer needs. This won’t just resolve the consumer issues but also the supply problem,” he added.

According to Mr Syed, they would take a futuristic approach at the symposium where stakeholders would look at planning initiatives, policy interventions, the role of technology, private sector interventions and a customer-centric industry.

The event was hosted by Engro Energy Limited in collaboration with CORPORATE PAKISTAN GROUP, National Electric Providing Regulatory Authority (NEPRA), Overseas Investors Chamber of Commerce and Industries (OICCI) and the Government of Sindh. It was moderated by Najma Minhas, Managing Editor of Global Village Space.

In his opening remarks, Chairman NEPRA Tauseef H Farooqi talked about his initiatives at the regulatory authority. Talking about the CTBCM, Mr Farooqi said he had spent a lot of time. “CTBCM is like creating a motorway…we have a successful model of the telecom industry, and we are trying to replicate that… we are giving a choice to consumers,” he said.

In his address, Minister of State and Chairman Board of Investment, Muhammad Azfar Ahsan, said Pakistan was an important regional hub. “Energy systems worldwide are going through a change – like how we fuel our cars, power our industries, energy use has increased, and human activities have become dependent on it.”

“Pakistan has successfully overcome the energy crisis which has directly/indirectly impacted everything… Pakistan aims at increasing the renewable energy share in line with the Sustainable Development Goals by utilizing the indigenous and clean energy sources available in the country,” added the State Minister.

Talking about the global energy perspective change, OICCI’s President Ghias Khan said: “We are living in challenging times. Back in 2019, we were looking at two major things: the transition to sustainable energy and a just energy system. Over the next two years, we got two more shocks – COVID-19 and the Russia-Ukraine war – which is problematic because Russia is a major exporter of oil and coal; taking out their supply from the system will lead to catastrophic impact.”

“What is the importance of this to Pakistan? Our economy is import-driven. What can we do about this… it is almost as if we don’t have a choice but bring about necessary reform in the country. We need a deregulated/reregulated market. Customers deserve and need a competitive market, so suppliers are forced to serve customers better,” he explained.

According to Mr Khan, it was important for the country’s power sector to become consumer-centric. “We should not forget the 55 odd million people who still don’t have electricity. We must do whatever we can to provide them with off-grid solutions,” he added.

He also spoke about a greener future and the economic impact on the future of Pakistan.

Talking about green energy and the Pakistani economy’s challenges, Pakistan Business Council Chairman Muhammad Aurangzeb said that currently, Pakistan’s share of green energy is 30%. He added that there was huge potential in solar and wind renewable energy.

He said it was important to note that capital costs in terms of renewable energy had come down. He added that wind power and solar power plants’ financing costs had also decreased while yields increased. “Therefore, what you see is a dramatic reduction in tariffs. We also have to remember that it is not just up to the government, but the private sector also has to step up.”

Talking about green financing, Mr Aurangzeb, also President & CEO of Habib Bank Limited, shared that HBL was one of the 26 global banks that had signed up on green investment principles – “we have come out and said we will not be financing anything coal”.

Next up was Dr Shamshad Akhtar, Chairman of the Pakistan Stock Exchange, who said it was important to address a just energy system. “A just system is about the appropriate balance between sustainability, accessibility and affordability – the power sector doesn’t do it for me on any of these scores yet,” she said. According to the former governor of the State Bank of Pakistan, the government needs to transit from being a single buying body. “This is important because governments keep changing. We need an independent energy provider. We need an integrated view of the energy sector,” she explained.

The Prime Minister’s Special Assistant on CPEC Affairs, Khalid Mansoor, also spoke at the event. He talked about the importance of coal in the power sector and China’s commitment to CPEC. He shared that it was important to focus on the power sector because several industries depended on it.

“If we have power, we will have industry. It is like the chicken-and-egg situation – what comes before – this is Pakistan’s issue. We have different consumption in the summer and winter…and industries have different usage and needs,” he said.

“This symposium is very important for Pakistan because the country has suffered from a major energy crisis. We used to have load-shedding that lasted several hours, but now things have changed. There are a lot of renewable energy projects in the works as well,” he added.

At the session, the panel discussed the importance of a market-oriented, a transition of power from the state to customers and moving towards a competitive environment.

Addressing the symposium, Mr Alvi appreciated the enlightening discussion on the migration towards a competitive energy market that would enable industries access to competitive pricing. He stated, “A lot of effort is invested in this complex subject. I believe we are moving in the right direction, and it seems that soon there will be a marketplace with multiple buyers and sellers.

KE is also working towards this objective, and we await the regulations which will underpin the CTBCM model. However, a level playing field is important to ensure that the interests of consumers are catered to, he remarked.

The Provincial Minister of Sindh for Energy’s closing address was given to Imtiaz Ahmed Shaikh. He said: “This is a historic moment. This symposium is an excellent place for discussion to discuss policies and open the market. The Sindh government has worked hard in the energy sector and has public/private sectors relationships with all the major players. We are serious about Pakistan’s energy sector.”

He added that there was a need to talk about good policies and plans for the future of Pakistan’s energy sector. He also discussed the Thar coal project, solar energy and the China-Pakistan Economic Corridor.