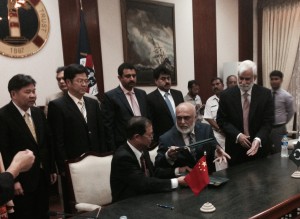 Our correspondent Karachi May 28, 2015, Pakistan and China signed an agreement for mutual cooperation in port sector today. The Memorandum of Understanding (MoU) was signed by Karachi Port Trust Chairman Admiral (Rtd) Shafqat Javed and Vice Governor Guangdong Province of China Mr. Liu Zhingeng. The ceremony was also graced by Pakistan Minister for Ports and Shipping Mr. Kamran Michael along with other port officials. While briefing journalists about the salient features of MoU, Pakistan Minister for Port and Shipping Mr. Kamran Michael and Karachi Port Trust Chairman Admiral (Rtd) Shafqat Javed said that this MoU will be first of its kind in the KPT’s history and will pave a long way in the development and progress of Karachi Port. Under the MoU, China will provide training to port officials, logistic support and carry out feasibility studies, frame down guidelines for infrastructure development of port in years to come. On the occasion, Shipping Minister Mr. Kamran disclosed that with their efforts, Pakistan’s membership has been restored in IMO and Pakistan will contest permanent sitting under ‘C’ category soon. It may be mentioned here that Guangdong is a province on the South China Sea coast of the People’s Republic of China. According to state statistics, Guangdong’s GDP in 2011 reached RMB 5,267 billion, or US$ 815.53 billion, making its economy roughly the same size as the Netherlands. Furthermore, its 2011 nominal GDP is well over half of India’s using 2012 exchange rates. Guangdong has the fourth-highest GDP per capita among all provinces of Mainland China, after Jiangsu, Zhejiang, and Liaoning. The province contributes approximately 12% of the PRC’s national economic output, and is home to the production facilities and offices of a wide-ranging set of multinational and Chinese corporations.
A statement issued by KPT says that a 6 member’s delegation of the Guangdong Province, China, led by Mr Liu Zhigeng, Vice Governor, Guangdong Province of China, visited Karachi Port Trust today, for signing Memorandum of Understanding (MOU) for strengthening of port and shipping connectivity and for establishing cooperation between Guangdong Provincial Transportation Department and Karachi Port Trust.
It acknowledges the existing friendly relations between Pakistan and China and fulfils the desire of strengthening the existing friendly relations through cooperative activities as ports in Guangdong Province, China, and Karachi Port Trust, Pakistan, are transportation hubs of the two countries. The MOU envisages promoting cooperation in port and shipping logistics, strengthening communications and establishing closer ties between the two countries.
It was informed during the signing ceremony that both the Karachi Port Trust and Guangdong Province ports have agreed mutually agreed to cooperate in the field of freight and logistics, especially in port and shipping industry, thus serving the import, export and transhipment of goods from Guangdong Province. They agreed on jointly studying policies for promoting the development in freight and logistics of both the signing parties of MOU for strengthening freight and logistics information connectivity for facilitating and accelerating customs clearance for the reduction of companies’ logistics cost. It was also agreed that both the parties will boost all round cooperation in investment and operation by the port logistics of their respective countries.
With regards to improving professional and management skills of the managers of the port and shipping industry, it was agreed by Karachi Port Trust (KPT) and Guangdong Province ports to carry out professional education and training in the field of port and shipping and logistics. Provision has been kept for further consultations on cooperation and other issues of common concern as both the parties have endeavour to engage the administrative authorities and industry associations of the respective two countries for maintaining constant contact and for sending their representatives to visit each other for communication advancement.
Share: