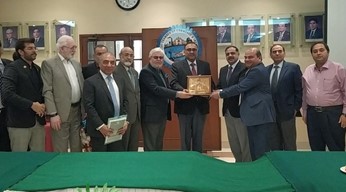 Pro-Rector of National University of Technology (NUTECH) Maj. Gen. Khalid Jawed, while expressing the determination and resolve to set up NUTECH campus in Karachi, stated that there was ‘no lack of will or energies’ for setting up NUTECH University campus in Karachi which when established would certainly prove beneficial for the industries in Karachi in general and Pakistan’s economy in particular.

Exchanging views at a meeting during the visit of NUTECH delegation to Karachi Chamber of Commerce & Industry (KCCI), Pro-Rector NUTECH said, “As we and the Chief of Army Staff were feeling the pains for Karachi, we are endeavoring to open up a NUTECH campus in Karachi which will become a reality only when we all work hand in glove.”

Maj. Gen. Khalid Jawed also appreciated the support extended by Karachi Chamber particularly the all-time cooperation by Zubair Motiwala, Jawed Bilwani and Shariq Vohra who all enthusiastically provided their valuable inputs and suggestions for setting up NUTECH Campus in Karachi.

Registrar NUTECH Dr. Syed Adnan Qasim, while delivering a comprehensive presentation on how NUTECH Karachi Campus would prove beneficial for the industries, exports and the economy, stated that Pakistan desperately needs to undertake major strategic steps for substantial import substitutions, industrial technological upgradation and development, value-addition and significant enhancement of diverse value-added exports. “A joint public-private partnership based NUTECH Karachi campus will be the right step to address the desperate needs of the country.”

He was of the view that materialization of the envisaged NUTECH University Campus in Karachi in the near future will decide the strategic direction of the industrial and economic development of Pakistan in the 21st century.

He was of the view that although Karachi exports 54 percent which means that the exports figures must be somewhere in between US$12 to US$14 billion but these figures were not depicting the potential of Karachi as the city is capable of fetching much more but it was unable to do so because the city continues to suffer badly due to discrimination.

While referring to suspension of gas supply to general industries in Karachi, Chairman BMG said that gas supply to Karachi was around 940mmcfd, of which the industries utilize 380 to 400mmcfd while the general industries use about 180mmcfd. “Instead of shutting down gas to general industries, the SSGC should carry out staggering gas holidays and we are ready to sacrifice one day’s production but we must gas adequate gas with good pressure during the remaining six days. Divide Karachi into seven parts and carry out gas load shedding in each part every day which would certainly resolve the problem. With better load management and staggering holidays, the entire Karachi can be kept operational without any problem.”

This gas issue was not out of context for today’s meeting because it may create obstacles in NUTECH University’s aims and objectives as it intends to encourage industrialization and create export surplus which would not be possible if gas, electricity and other important inputs required for setting up an industry were not available, he added.

Zubair Motiwala, while appreciating the enthusiasm being exhibited for setting up NUTECH in Karachi, said that Karachi Chamber and all industrial town associations would fully support NUTECH University’s endeavor to set up a campus in Karachi which would surely ensure progress and prosperous for the country’s economy.

While appreciating the efforts made by Registrar NUTECH Dr. Adnan Qasim, Immediate Past President KCCI and Focal Person Shariq Vohra said, “The planned NUTECH Campus for Karachi should provide courses as per demand of the modern world particularly the courses on Artificial Intelligence and Robotics etc. which were missing in the concept paper. We have to come close to what the developing countries like China have been doing otherwise we will be left behind”, he added.

He was of view that building a huge NUTECH Campus in Karachi with massive infrastructure at a cost of billions of rupees will require a lot of time, hence instead of waiting, NUTECH University should immediately start operations in Karachi by establishing a remote institution in any of the existing institutes like the Textile Institute of Pakistan at Port Qasim where plenty of space was available or any other institute under the administration of PAF or Navy in Karachi. In this regard, Shariq Vohra and many other participants representing the industrial community of Karachi, suggested to immediately start offering NUTECH courses from any facility on rented premises so that a future faculty structure is built as well as Karachi’s human resource scarcity could be addressed.