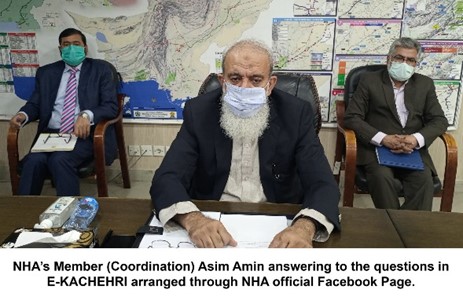 As per directive of Prime Minister of Pakistan Mr. Imran Khan on reaching out to the public through holding Khuli Kachehris by organizations under the Federal Government, National Highway Authority’s, Member Coordination Mr. Asim Amin held E-Kachehri at headoffice of the Authority through NHA official Facebook Page and answered to the questions placed by the people all over the country.

In his opening remarks, Mr. Asim Amin (Member Coordination) said, Balkasar-Mianwali-Muzaffargarh Road, after federalization, has been given in the control of National Highway Authority. NHA now is planning and designing for its upgradation and dualization. In order to provide immediate relief to the travelers’ NHA is awarding contracts to make these road potholes free. He said, NHA is also working for dualization of 1264 KM long Indus Highway starting from Peshawar to Jamshoro and Hyderabad. Indus highway is being completed with the cooperation of Asian Development Bank. He said dualization of Indus highway will be completed by 2027 it is worth to mention distance of Indus highway is 450 KM less as compared to GT Road (N-5) between Karachi and Peshawar. He further said that the project of Shahdara Flyover near Lahore possessive great significance and NHA is working for early start of work on this project. The Flyover will greatly help to overcome traffic congestion there. He hoped that feasibility report of flyover will be completed by June this year and contract will be awarded by November 2021. He further said, as per directive of the Prime Minister Office, complaints regarding overcharging and provision of sub-standard items at motorway service/rest areas are being attended promptly. To this effect, NHA has formed special teams which raided on the spot and took action against the responsibles. He appealed to the travelers to obtain receipt of shopping and compare the rates shown on receipt with the rates declared by the local administration also displayed there. In case of overcharging complaints may be lodged at the phone numbers provided there. He assured that necessary immediate action will be taken against the defaulters. Mr. Asim Amin further informed that total length of NHA network is about 13,000 KM and maintenance activities on its various segments continue round the year. Traffic volume on Rawalpindi-Lahore GT Road is increasing day by day and its maintenance stands among our priorities. He informed that Rs. 70-80 billion are required per annum for proper maintenance of NHA network. While available amounts tune to Rs. 30-35 billion per annum which are collected from toll tax. In such a state NHA has to determine priorities for maintenance of various sections of NHA network. He also requested to the travelers to avail facility of M-Tag to avoid long traffic queues at Toll plazas. Todate about 30-40 percent people are availing M-Tag facility.

Giving answers to the questions, Mr. Asim Amin (Member Coordination) said, Karachi-Quetta Chaman highway (N-25) is an important link between Balochistan and Sindh provinces. NHA is undertaking all possible steps for its dualization. Continuing answer to a question he said NHA’s is attaching importance to the upgradation of Thakot-Raikot section. He informed that work on WAPDAs Dams projects were also located on this highway and that consultancy work of this project is underway. He said, PC-I for construction of Chitral-Shandur Road has been approved and this project is in tendering process. This important project will be started in next two to three months. Speaking about Soan Bridge project Rawalpindi, he said, work of shifting of utilities is being completed at a rapid pace. Completion of construction work for Soan Bridge project will be completed this year. He further informed that designing and tendering work of Zhob- Kuchlak Highway (N-50) is completed and construction activities will be started in 4-6 weeks. Likewise Hakla-D.I Khan Motorway will be completed in next a few months. He said Sialkot-Kharain-Rawalpindi Motorway project is an important project. After designing steps are being taken to bring it in tendering process. NHA is continuously conducting operations against encroachments established in its right of way, he added.