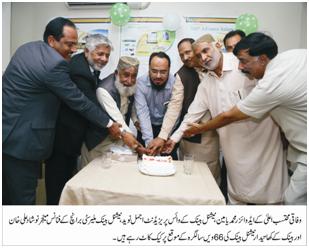 Advisor to Federal Ombudsman’s Regional Office Muhammad Yameen has said that National Bank is superior than all banks of the country, National Bank is not backward than anyone in the field of social welfare, services of NBP are better than other banks, he was addressing on the occasion of inauguration ceremony of ATM on 66th anniversary of National Bank.

On this occasion Finance Manager Noshad Ali Khan and large number account holder were present. Muhammad Yameen said that National Bank always took care of its account holders although numbers of its account holders are greater than other banks. He said that I have an account for 29 years in NBP Malir City Branch where I never face any difficulty. He said that today is 66th anniversary of the bank and inauguration of ATM machine on this occasion is a honor for me, he said more that I love Malir that is why I do not open my account at any other place. Vice Chairman of National Bank Syed Ajmal Naveed said that services of NBP are better than other banks while this bank has an honor to have the largest number of account holders. He said that a large number of pensioners are also attached to NBP who are our big power. He said that National bank has also a prominent place in social services and sports activities and everybody knows it. He said that aim of celebrating 66th anniversary of the bank and customer week is to make understanding of our customers and to take practical steps for their solution. Finance Manager Noshad Ali Khan said on this occasion that aim of inauguration of ATM machine is to provide better facilities to our customers. Chief Guest Muhamad Yameen and Ajmal Naveed cut the cake of 66th anniversary of the bank in presence of account holders. Several account holders also addressed to the ceremony and showed their trust upon better services of the bank.