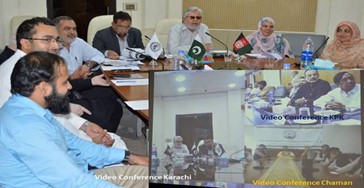 As per the notification issued by PAJCCI in context of its elections for the year 2018-19, Mohammad Jawaid Bilwani has been chosen as the President of the Chamber unanimously. He is one of the founding members of the Chamber and has been instrumental in facilitating the regularization of the chamber since inception.

Chairman PAJCCI, Zubair Motiwala welcomed the new team and showed confidence that under such seasoned management, PAJCCI will be better equipped and attain further successes. He iterated that the Chamber has been successful in managing certain lacunas; however, there is a long way to go to make the mark impressively. Secretary General, Faiza deliberated upon the scope of PAJCCI’s activities and deliberated upon the advocacy initiatives taken by the joint chamber for strengthening the ties across the border. Retiring President Junaid Makda presented an activity report of 2017-18 year and urged the new team to take up matters from immediate effect. The audited statements of PAJCCI were also approved. PAJCCI also successfully connected its regional offices via video conferencing for the first time.

The newly elected President, thanked the executive body for the vote of confidence and ensured that under visionary leadership of Zubair Motiwala (Chairman, Pakistan Chapter) and Khan Jan Alokozai (Co-Chairman, Afghan Chapter) along with due support from executive committee members of both chapters, the Chamber will ensure further efforts in alleviating mutual issues of businesses across the border. He added that futuristic perspective of PAJCCI is to enhance regional trade ties and capacity building of business entities to tap the emerging opportunities.

Chairman PAJCCI strongly urged the governments of Pakistan and Afghanistan to reinvigorate the initiatives taken to strengthen bilateral economic ties across the border. He further requested a call-on meeting with H.E. Prime Minister of Pakistan and his team for deliberating upon important issues that require policy advocacy and for incorporating strategic insight to facilitate the solution of major issues hampering the historical ties between two brotherly nations. He further requested for convening a meeting between private sectors and government officials of both the countries for facilitating them in reconnecting with each other and identifying common grounds of peace, prosperity and strong economic ties. Further, involvement of joint chamber, that represents sentiments and issues from across the border, would significantly help not only in improving the business graph but would also re-establish the confidence building measures.