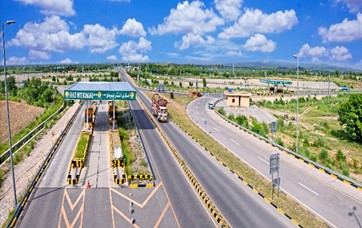 Ministry of Communications attached department National Highway Authority is actively engaged in construction extension, operation and maintenance of motorways and National Highways with the view to put the country on the track towards development construction of roads undoubtedly cost heavy amounts and their proper maintenance further demands more financial resources.

During the last three years, the present Government has planned several roads building and maintenance projects. To reduce the financial load to this effect, the NHA is building roads on a Public-Private Partnership basis. Besides, NHA is chalking out a comprehensive plan to increase its revenue by utilizing Right of Way (ROW). Geographic Information System (GIS) it’s a step forward to this effect that will enable NHA to meet its financial requirements through its resources.

The responsibility for countrywide planning, construction, operation and maintenance of motorways, national highways, strategic roads, bridges and tunnels is assigned to National Highway Authority (NHA), Ministry of Communications. Presently total length of the road network of the country is about 264,000 Kms. At the same time, the whole length of 51 Motorways and National Highways under the jurisdiction of NHA is 13,572 Kms which include 11,255 km-38 National Highways, 2055 km-10 Motorways, and 262 km-3 Strategic Roads.

As per the vision of the Prime Minister of Pakistan Mr Imran Khan, Ministry of Communications, National Highway Authority (NHA) has successfully started work for construction of motorways and national highways under Public Private Partnership (PPP) mode, thus providing opportunity to Private Sector to invest in road building schemes of the Public Sector. The Federal Government has formulated a comprehensive policy to undertake projects on the PPP mode. To this effect, an Act has also been approved for effective implementation of such projects. Establishment of Public Private Partnership Authority also expresses Government’s interest to this approach.

A Public Private Partnership Cell is also actively functional at NHA head office. The Cell has made practical advancement for Private Sector participation in National Highways, Motorway, Tunnels and bridges projects in the country. NHA considers that the technical, managerial and financial resources of the Private Sector can make a useful addition to its own efforts. After carefully evaluating a wide range of alternatives, NHA has decided to encourage the private sector to participate in a number of significant projects of national highways and motorway as well as a limited number of tunnel and bridge projects with the view to support and sustain Pakistan’s rapid rate of economic growth. This initiative will not only prepare the ground to promote construction industry but will help at large to reduce financial load on national exchequer. In the matter, Federal Minister for Communications and Postal Services Mr. Murad Saeed has emphasized upon the executive officers, construction experts and engineers to play operative role to further accelerate the construction process for early realization of projects under Public Private Partnership mode, so that more roads could be built without financial support from national exchequer. Completion of motorways and national highways projects will enable people to avail better transportation facility thus paving the way for uplift of agricultural, industrial and trade activity besides giving impetus for development to construction sector. Undoubtedly, the PPP based schemes are repository to national development ultimately putting country on the track towards a new Pakistan.

The Government of Pakistan’s vision is to substantially increase the road density till 2030 and achieving this mammoth development goal is only possible with the support of private sector. It seems apt to recall that countrywide motorways and national highways projects are being undertaking under gigantic China Pakistan Economic Corridor (CPEC) and Central Asia Regional Economic Cooperation (CAREC) programne. NHA is committed to put country on the track towards socio-economic development. Public Private Partnership (PPP) has been prevalent nowadays in developing as well as developed nations of the world. Creation of private sector interest in infrastructure projects for better service delivery is the tool being used successfully. Insufficient fiscal budget, Public Sector Development Programme (PSDP) allocations need to be supplemented by off budget financing through Public Private Partnership. This will help fulfill needs of national and regional trade in the upcoming years.

The PPP is becoming an essential component of NHA’s development strategy. The objectives set by NHA for the PPP include, interalia, road infrastructure development, off budget financing, efficiency, investment, sustainability and revenue generation. During the last a few years, NHA remained successful in providing conducive atmosphere for private sector investment in road building schemes and todate has completed four projects of worth around Pak Rupee 135 billion under the PPP on Build-Operate-Transfer (BOT) basis. Construction of 2 Km long new flyover (Habibabad bridge) located on N-5 is one of the projects completed on PPP at cost of Rs. 0.831 billion. Likewise overlay and modernization of 357 km Lahore-Islamabad motorway has also been realized costing more than Rs. 46 billion. Further, conversion of 4-Lane highway into six lane Karachi-Hyderabad motorway was also taken on PPP mode. This 136 km long motorway was completed at cost of Rs. 44.251 billion. Another success of NHA is the completion of 89 km long Lahore-Sialkot motorway. This 4 Lane motorway is built with 6 lane structures at cost of Rs. 43.847 billion. This motorway has linked industrial city of Sialkot with motorways network of the country. On successful completion all these projects are operational now.

Pursuant to PSDP plus Programme of Government of Pakistan, NHA has developed a comprehensive portfolio and accordingly 9 more projects having total length of 1726 Kms, are in pipeline for implementation through the PPP modality. Completion of Sukkur-Hyderabad motorway will realize the dream of Peshawar-Karachi motorway (PKM), and travelling time between Peshawar and Karachi will be reduced to only 16 hours from two days travelling. In order to ensure better planning of Sukkur-Hyderabad motorway project and attract private investment in this scheme, National Highway Authority also arranged a Stakeholders Consultation with the cooperation of Public Private Partnership Authority (PPPA) at NHA Headquarters, where in professionals hailing from construction industry, contractors and financers were invited at large.

Commercial Attachee of Saudi Arabia based in Islamabad, representatives of Asian Development Bank and World Bank Group also participated the session through via video link. The main purpose of inviting the best professionals in their respective field was to invite fresh ideas regarding procurement of only missing motorway link i.e. Sukkur-Hyderabad Motorway to complete the high speed North-South Economic Corridor. NHA is endeavoring hard for earlier start of construction activity on this mega project. Sukkur-Hyderabad Motorway will be 306 km long, 14 interchanges, one major bridge on River Indus, 6 flyovers, 10 Service Areas and 12 Rest Areas will also be built along this motorway. The project is planned to be completed in 30 months at construction cost of approximately Pak Rupee 190 billion with Intelligent Transport System (ITS). Construction of 69 Km Long new 4 lane motorway from Sialkot to Kharian has already been advertised with last date of submission of Bid of April 30, 2021. Construction of new motorway from Kharian to Rawalpindi (115 Km), will also be realized with Private Sector Financing. Existing 129 km, 2-Lane Balkasar-Mianwali road will also be dualized into 4-Lane highway.

In order to facilitate the travelers, this road is being repaired presently. This road will be extended from Mianwali to Muzaffargarh into 4-Lane highway. The length of this road is 286 Km. Construction of Barakahu Flyover, Islamabad is an important project, that is planned on PPP mode at N-75. This flyover will help smooth the flow of traffic and remove traffic congestion at Barakahu. The length of this flyover will be 4 km. Similarly, a 7 km long new flyover is also planned at Shahdara on N-5. The flyover will help discipline traffic there, thus saving time and fuel charges to a great extent.

National Highway Authority has also planned construction of 20 km long Lyari Elevated Freight corridor in Sindh province. This corridor will link Karachi Port with the Karachi-Hyderabad motorway (M-9), thus linking rest of the country with the port of Karachi. 790 km Karachi-Quetta-Chaman National Highway N-25 possesses great significance with regard to trade activity between Sindh and Balochistan. Work on its dualization will be started this year. This will enable people to avail better transport facility. While new employment opportunities will also be generated for the local in particular.

Participation of the private sector in motorways and highways building schemes will bring National Highway Authority and Private Sector closer, and both will avail the opportunity to have the maximum advantage from experiences of each other.

In order to enhance revenue, NHA has also initiated the project of Geographic Information System (GIS) Survey and the development of Geodatabase of its network. This project will enable NHA to digitize the complete information regarding utilities and commercial amenities in the Right of Way (ROW) of NHA network. Affairs of the NHA are being run in a transparent manner and the process of making the authority financially independent is in progress.

The targets set during the last three years were achieved well in time. NHA is endeavouring to enhance its revenue that will help to reduce the load on the National exchequer. (The writer Mr. Sibtain Raza Lodhi is Deputy Director (Public Relations) National Highway Authority).