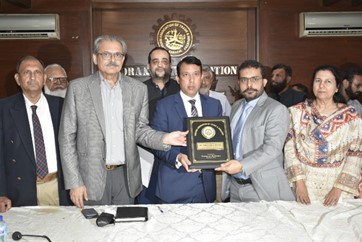 Managing Director of Karachi Water and Sewerage Board Salahuddin Ahmed has said that on the request of KATI, water board machinery will be allocated for the needs of the Korangi Industrial Area. Ever since taking charge, there is no pressure, the Water Board has been undergoing revolutionary changes. He expressed these views during his visit to the Korangi Association of Trade and Industry (KATI).

MD Water Board Salahuddin Ahmed said that the Water Board complaints and tankers system will be digitized. In the coming 15 days, all tankers, complain centers and XCN offices will be digitized and geo-tagged. Salahuddin Ahmed said that immediate steps will be taken to resolve the complaints of the members of KATI and in this regard, modern technology will be resorted to. He said that in the coming day’s people will feel a big change in the performance of the water board. MD Water Board said that they are taking strict measures to eradicate corruption. He said that no orders were issued regarding subsoil.

Zubair Chhaya, CEO of KITE Limited, said that the biggest problem in Korangi Industrial Area is water and sewage. Changing the names and positions in the water board alone will not solve the problems, it is imperative to replace the corrupt staff. He said that the Water Board does not take any action on complaints. There are also video proofs of waterboard vehicles and crews watching the problems as silent spectators. The problems in the industry have increased due to subsoil, water is required to run the industries and the industrialists are stumbling now and then for this right and the water board staff is looting them with both hands.

Chairperson of the Standing Committee Nighat Awan said that 80 percent of the main holes in the Korangi Industrial Area do not have covers. The staff does not listen to the complaints of the industrialists and blackmails them with legal action and fines if they try to fix their problem with their resources.

Former President Masood Naqi said that all machinery and development works of the Water Board should be on record. The system of water lines in Karachi is so old and there are no documents about it. First, the system of lines needs to be mapped. He said that numerous problems are arising due to sub-soil in Korangi Industrial Area which needs to be solved immediately.