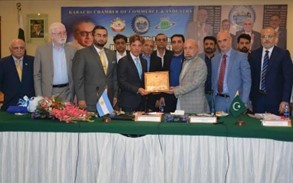 While expressing Argentinean interest in the Agricultural and Livestock Sector of Sindh, Ambassador of Argentina Leopold F. Sahores said, “Our main focus is the agriculture and livestock sectors. We want to see how we can partner and encourage joint ventures with Sindh government and the business community of this province.”

“As Argentina is an agricultural country, we can offer a lot while the producers and farmers in Sindh can learn from our experience and expertise so that they could become efficient”, he added while exchanging views during his visit to the Karachi Chamber of Commerce & Industry (KCCI).

The Ambassador said that Argentina’s agriculture sector was not as efficient as it has become now which became possible through adoption of technology particularly the bio technology. “We are also interested in helping Pakistan in grain storage which is very important and crucial because it is related to food security.”

He noted that trade volume between Pakistan and Argentina was less than US$170 million which was too low so both countries need to make collective efforts and find creative ways to make trade bigger. Enhanced interactions, business to business meetings and exchange of trade delegations to both countries would help understand each other and jointly explore possibilities of enhanced cooperation.

Leopold Sahores said that as Karachi was the financial hub and engine of Pakistan’s economic growth hence, the Argentinean Embassy was keen to explore possibilities for trade enhancement and investment cooperation between the business community of Karachi and its Argentinean counterparts. “We are very much interested in bringing the Argentinean businessmen here to discuss and explore possibilities of trade and investment cooperation”, he said.

He was of the view that regardless of distance between the two countries, Pakistan can offer lucrative opportunities to Argentinean businessmen as there was a lot of potential for supplying commodities not only in the Pakistani domestic market but also to Central Asia from Pakistan because it was very well positioned in this region.

Argentinean Ambassador also extended full support and cooperation to Karachi’s business community so that trade and investment ties could be improved while regular interactions must also take place which would pave way for further strengthening the existing bilateral relations.

Earlier, President KCCI Tariq Yousuf, while welcoming the Argentinean Ambassador, stressed the need for strengthening Argentina’s trade and investment cooperation with Pakistan particularly with the business community of Karachi which was the financial and industrial hub of Pakistan, contributing around 68 percent revenue to the national exchequer and 54 percent in terms of exports.

He suggested that Argentina must look into the possibility of undertaking joint venture in the dairy sector of Pakistan which although carries a lot of potential but was underperforming mainly due to lack of value addition. “As Argentina’s dairy sector is more developed and Pakistan’s has been importing several dairy items from your country hence, this is an area where Argentinean business community can collaborate with their Pakistani counterparts for improving the yield and adding value to Pakistani dairy products.

President KCCI further requested the Argentinean Ambassador to use his good office to promote joint ventures in any sector of the economy and make some kind of an arrangement for Pakistan’s dairy sector so that they could learn from Argentinean expertise in processing milk products. He extended full support and cooperation to the Argentinean Embassy in all its initiatives focused on promotion of bilateral trade between the two countries.