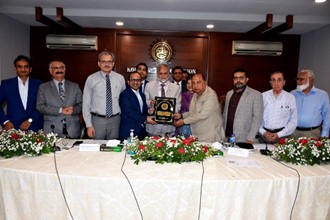 A memorandum of understanding has been signed between the Korangi Association of Trade and Industry (KATI) and Pakistan Industrial Technology Park (PITP). The agreement was signed by KATI President Salman Aslam and PITP Chairman Engineer Tahir Ikram. On this occasion, KATI Patron-in-Chief SM Muneer, Senator Abdul Haseeb Khan, KITE Limited CEO Zubair Chhaya, Senior Vice President and Standing Committee Chairperson Mahin Salman, Vice President Farrukh Qandhari, Former Presidents Saleem-uz-Zaman, Gulzar Feroz, Ahteshamuddin and a large number of women and youths associated with the FinTech sector were present on the ceremony. The objective of the MOU was that Pakistan Industrial Technology Park will provide services keeping in mind the needs of the industries associated with the Korangi Industrial Area.

Which will not only benefit the industries but also promote the latest state-of-the-art technology in the industries. On this occasion, Chairman of Pakistan Industrial Technology Park Engineer Tahir Ikram (HI) said that the institution aims to provide modern and world-class facilities to the industries of Karachi. This will also benefit the industry and the students studying at the university will also get an opportunity to enhance their skills and talents. He said that Pakistan has an immense talent which we are not utilizing properly. In such a situation, the establishment of Pakistan Technology Park will enable talented youth to access the industry. He said that research and development in Pakistan progressing rapidly, but if local industries are not able benefit, then how will the local youth be encouraged? This is the reason why the country’s talented youth go abroad to seek opportunities from whom international companies reap huge profits.

Earlier, KATI Patron-in-Chief SM Muneer said KATI is the only trade body where women are represented. For the development of a nation, it is necessary that its women also participate in activities alongside men. He said that women have always been encouraged in KATI, not only that, women have been represented at the federal level from the platform of UBG. He said that the women of Pakistan are very talented and they have made Pakistan proud at the global level.

SM Muneer further said that at present the country is going through the disaster of floods. In this difficult time, a lot of assistance has been given to the flood victims at the global level but those goods are not reaching the victims. He demanded that Prime Minister Shehbaz Sharif and Sindh Chief Minister Murad Ali Shah take notice to ensure timely availability of relief supplies to the victims.

President KATI Salman Aslam said that the Korangi Association of Trade and Industry is a 52-year-old institution patronized by SM Muneer, it is an institution that always prioritizes youth talent. He said that women in KATI are represented by talented women like Maheen Salman, who not only took numerous steps to make women empowered and capable in the industrial area, but also helped women to compete in international markets through vocational training. He said that the youth of Pakistan has made the nation proud globally, these people dedicated their services to the country but they face disappointment when they do not see any clear policy from the government. He said that the government is not showing seriousness for the development of the country, and talented youth is being wasted. If they get opportunities in the country, Pakistan can develop rapidly in the world.

Senator Abdul Haseeb Khan, former president KATI, said that Pakistan is rich and a blessed country, but what is the reason why the country is not developing? He said that three sectors are important for the development of any country, namely academia, women entrepreneurs and talented youth, If these three are united, any country can develop.

He said that Pakistan has very fertile land but we why we are not able to increase our agricultural production even after 20 years. This shows lack of policymaking in the country. He said that women have to unite on one platform. He said that we have to promote the local industry along with our products at the international level.

Zubair Chhaya, CEO of KITE Limited, said that youth are the beacon of hope in Pakistan. But our youth is not getting opportunities through which they are able to show their full potential. Industrialization is the only solution for economic stability, but unfortunately, there is no policy and no plan for industrialization in Pakistan. While industrialization continues at a very small level which does not bring substantial benefits to the economy. He said that the IT export of the neighboring country India is 178 billion dollars, while the IT export of Pakistan is only 2.68 million dollars, which shows how far behind we are in the region.

Chairperson of the Standing Committee Maheen Salman said in her address that unfortunately Pakistan has coal reserves but there is a shortage of electricity, excess water causes floods but we lack in hydel projects, wind and solar energy have best opportunities in the region, but the nation lacks this facility. She said that a conspiracy is being made against Pakistan. It is said that to destroy the sovereignty of any country, one must destroy its industries and make it dependent on imports. Unfortunately, being an agricultural country, we import wheat. Maheen Salman said that we urgently need the establishment of industrial parks for the development of start-ups and new industries. The government should make long-term decisions in the policy, but till now the rulers of the country have taken short-term decisions for personal interests, which gives temporary benefits, but the country does not progress on the path of development. This is the reason why Pakistani’s economy is at risk whenever the government changes in the country, but if it is compared to other countries, the economy of America continues to grow at its pace even after Trump’s departure. She said that we have to provide opportunities to the youth so that Pakistan can become economically independent and stable. She said SME’s are life line of any economy and we must believe in “Be Pakistani and Buy Pakistani” for survival of Pakistani economy. Also a “Charter of Economy” should be developed.