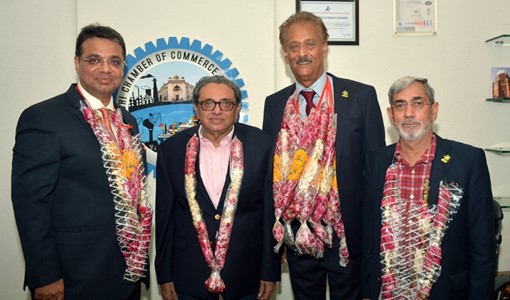 Chairman Businessmen Group (BMG) & Former President Karachi Chamber of Commerce & Industry (KCCI) Siraj Kassam Teli, while terming Prime Minister Imran Khan’s speech at United National General Assembly as “excellent”, stated that hats off to PM Imran Khan for vocally, vibrantly and fearlessly speaking the truth about Muslims, Islamophobia and Kashmiris which has never ever been done by any other President or Prime Minister.

Speaking at the 58th Annual General Meeting of KCCI, Chairman BMG said that irrespective of the economic and political issues, delivering such an impressive speech is not an easy thing to do at such a high level which the Karachi Chamber highly appreciates hence, the General Body Members must pass a resolution today in which Prime Minister Imran Khan must be praised for his excellent speech in which our PM rightly argued that why only Muslims are terrorists as terrorism has got nothing to do with religion.

“I don’t have words to praise PM’s speech as it was so good. Every single word deserves to be appreciated and I don’t think that the speech could be better than that”, he added.

Commenting on the economic issues being faced by the country, Siraj Teli pointed out that Karachi Chamber always opposed government’s policy to impose Regulatory Duties which, even though reduced trade deficit to an extent, but it was going to be really harmful for the economy. The government should have imposed complete ban on the import of luxury cars and those food items which are already available in Pakistan but the imposition of anti-dumping duties and other duties would lead to shrinking the economy and promote smuggling. “Regulatory duties have been imposed on so many goods yet all of them are easily available in bulk quantities all over the country due to widespread smuggling which was worsening the situation and proving unfavorable for the economy and the industry”, he added.

While urging the policymakers to bring down the exorbitant interest rates, Chairman BMG stressed that they will have to reverse the monetary policy as it has failed to yield positive results.

Referring to his conversations with Chairman FBR Shabbar Zaidi from time to time, Siraj Teli said that all the laws and policies have been devised to recover taxes from Karachi only whereas other cities and provinces have been set free and remain exempted from the taxation laws. “We have been demanding city-wise details about tax collection and the Chairman FBR also agreed to publicize the same but no city-wise info has been made available so far. We pay 70 percent revenue and we can even pay even more but taxes must also be recovered from other cities and provinces as well and taxation policies must be strictly implemented across the board”, he stressed.

He said that 70 percent of revenue contributed by Karachi is usually denied by many who give the same old excuse that most of the Head Offices and Ports are situated in Karachi which was the basic reason for highest revenue contribution. “Move all the Head Offices, multinationals and banks from Karachi to other cities while FPCCI must also be relocated to Islamabad yet Karachi city will continue to contribute the highest without all these Head Offices and the FPCCI”, he said, while urging the government to take strict notice of large number of fake and bogus trade associations and chambers at FPCCI.

He advised the newly elected Office Bearers that they must focus on urging the government not to keep its taxation activities confined to Karachi only and demand to enhance tax collection activities to all other cities of the country. “In this regard, a slogan “Taxation: Why only Karachi” be created for the year 2019-20. We are not saying we will not pay taxes, we will pay and pay even more than anyone else but others must also compelled to pay their taxes”, he added.

Siraj Teli further mentioned that the Businessmen Group was formed in 1998 and thanks to Almighty Allah, the business & industrial community and the general body members, BMG has not lost a single seat in all the 22 elections held since 1998. “Out of 22 elections, 13 elections were won unopposed by BMG candidates whereas stiff competition was witnessed in the elections of 2001, 2004 and 2018. In the last election of 2018, the highest number of 5245 votes were casted in favor of BMG candidates and the opponents were defeated with double the votes. Because of our hard work, good intent and dedication, majority of the business and industrial community supports us every year and whenever needed they come forward to get themselves counted.

Appreciating the commitments, assurances and plans given by the newly elected President KCCI Agha Shahab Ahmed Khan for 2019-20, Chairman BMG stated that since the newly elected President has so much experience and support, he has to deliver and perform exceptionally well. “Keeping in view the long association, experience and know-how of all three Office Bearers, the leadership has high expectations hence Agha Shahab, who is the 27th President from BMG along with Arshad Islam and Shahid Ismail will have to deliver and give performances”, he added

Siraj Teli, while acknowledging the efforts made by retiring President KCCI Junaid Esmail Makda, said that he worked really hard, gave full time to the Chamber, and remained available 24/7 throughout the year, besides reaching everywhere and struggling a lot to achieve numerous tasks. Junaid Makda along with Khurram Shahzad and Asif Sheikh Javaid performed really well and deserve to be appreciated for their commendable performance throughout the year.

He also requested the newly elected members of the Managing Committee to give maximum time to KCCI and punctually participate in Chamber’s activities otherwise they will be questioned about their inability to give time for attending the important meetings.

The newly elected President KCCI Agha Shahab Ahmed Khan, while highlighting his plan of action for 2019-20, stated that KCCI will be focusing on devising a comprehensive strategy to urge the federal and provincial government to give preference to the economic issues and set their political views and differences aside so that the economic situation improves that would certainly lead to creating an enabling business environment, promote expansion and industrialization, create employment opportunities and reduce poverty. “We will also focus on improving the performance of KCCI’s Secretariat and IT Department, besides seek ways and means for expanding KCCI’s social media activities”, he added.

Retiring President KCCI Junaid Esmail Makda, while highlighting the overall activities carried out during 2018-19, stated that he struggled really hard and approached all the high ups in Islamabad to get some of the most serious issues being faced by the business and industrial community since quite some time and it was really heartening that the present government has maintained close liaison with KCCI and assured to resolve numerous issues highlighted by KCCI. “I tried my best throughout the year, assisted everyone who approached my office for assistance and I hope that my performance has been as per expectations of the leadership”, he added.