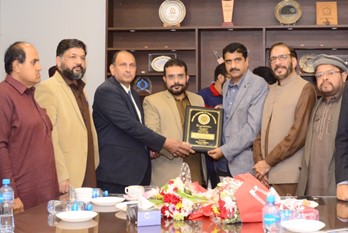 The delegation of the Korangi Association of Trade and Industry (KATI) headed by President Faraz-ur-Rehman visited the Karachi Press Club and met the newly elected officials.

Vice President Muslim Mohammadi and senior journalist Mujahid Barelvi were also present on this occasion. Karachi Press Club President Saeed Sarbazi and Secretary Shoaib Ahmed, Vice President Mushtaq Sohail, Joint Secretary Aslam Khan, Governing Body Members Shams Kerio, Farooq Sami, Zulfiqar Wahoocho, Zulfiqar Rajpar, Rameez Vohra welcomed the KATI delegation on arrival at the club. President Faraz-ur-Rehman while congratulating the newly elected officials on their unopposed success said that it is hoped that the newly elected body will play its key role in raising the voice of truth and rights of freedom of speech according to the traditions of Karachi Press Club. He said that the journalists and media representatives associated with the Karachi Press Club always pointed out the difficulties faced by the people and important issues related to political, social, especially economic problems at the Higher level. Faraz-ur-Rehman said that journalists, especially the Karachi Press Club, have an important role in highlighting the problems of the business community in the ongoing economic crisis in the country, for which the business community is grateful. Faraz-ur-Rehman said that journalists are also a part of this society and they also face the same problems as common people but they put their problems behind them and perform their duties well for the betterment of society. This is the reason why journalism is considered an important pillar of society. President KATI congratulated Karachi Press Club President Saeed Sarbazi and Secretary Shoaib Ahmed and assured his full support. He said that outgoing President Fazil Jamili and Secretary Rizwan Bhatti have done exemplary work in the Karachi Press Club in the last two years, which is a beacon for the upcoming officials.