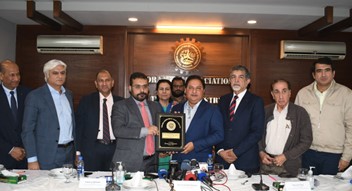 Funding will be provided for Korangi Industrial Area in the same manner. The issue of Mehran Town will be raised in the cabinet.

On this occasion, Faraz-ur-Rehman, Senior Vice President Nighat Awan, Vice President Muslim Mohammadi, Former Presidents Zahid Saeed, Masood Naqi, Danish Khan, Sheikh Umar Rehan, Gulzar Firoz, Saleem-uz-Zaman, Johar Qandahari, Farrukh Mazhar, Special Advisor to the CM Sindh Faraz Abid Lakhani, Secretary Industries Abdul Rasheed Solangi, MD of Sindh Small Industries Shahid Ali Shah and members and senior officers of KATI were present. The provincial minister said that the request will be made to the chief minister of Sindh for the availability of ambulance and winching machines for KATI. Sindh government wants to promote industrialization but unfortunately, gas is not being given to Sindh as per the constitutional right. Chairman People’s Party Bilawal Bhutto Zardari had directed to participate in the protest along with industrialists.

Jam Ikram Dharijo said that provision of more funds to KITE Limited and EDF will be done with mutual consultation. There is a need to establish more industrial zones in the city. The Sindh government has recently set up a 2,000-acre industrial zone on the Northern Bypass and is keen to set up more zones across the city.

He said that the current situation is providing an opportunity to produce the raw materials locally instead of importing them. Lakhani said we want to form a coordination committee with representatives of all industrial areas including KATI, whose aim is to remove obstacles in business through mutual consultation, suggestions of KATI are also required in this regard.

Earlier, KATI President Faraz-ur-Rehman said that currently, the industry is facing the toughest conditions in history, and the economic crisis has taken a serious turn. Cargo is stranded at the port, destroying industries and leaving large numbers of people unemployed.

President KATI 0said that for the non-issuance of LC and not clearing the goods at the port to save foreign exchange, fines of millions of dollars have been imposed in terms of demurrage and detention, which have become more than the value of the goods.

Instead of saving foreign exchange, this move will result in paying double the price as a penalty.

Faraz-ur-Rehman said that Mehran Town should be given the status of an industry because it is impossible to run the economy without a cottage industry.

President KATI said that ambulances for the fire station and dedicated winching machines for KATI are needed to restore the sewage system. He said that due to the increase in electricity and gas prices, the cost of production has increased, and the industries will not be able to bear the burden of the 50 rupees per liter levy on petrol. President KATI said that KITE Limited received a fund of 1 billion rupees from the government and spent it on Korangi Industrial Area, which greatly improved the infrastructure of the area. More funds are required for development works. He said that we seek cooperation from Sindh Government to raise industrialists’ issues of unfair distribution of gas before the federal government, gas is not available to Sindh according to the constitutional right. Former Presidents