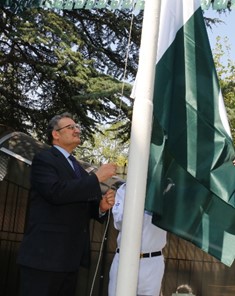 The 73nd Independence Day of Pakistan was celebrated today in Ankara with traditional fervor. Ambassador of Pakistan, M. Syrus Sajjad Qazi, hoisted the national flag on the tune of national anthem in the presence of the Pakistani community, students, and Embassy officials and their families.

The special messages of the President and Prime Minister of Pakistan were read out on the occasion. Pakistani leadership in their separate messages paid glowing tributes to the sacrifices of Pakistan’s forefathers. They vowed to transform Pakistan in accordance with the vision of Quaid-e-Azam Muhammad Ali Jinnah and Allama Muhammad Iqbal. Pakistani leadership also expressed deep concern at the worst kind of oppression and ruthless state terrorism perpetrated by Indian in the Indian Occupied Kashmir. Pakistani leadership reassured Pakistan’s political, moral and diplomatic struggle for self-determination.

Ambassador Syrus Qazi in his remarks said that today we are commemorating Pakistan’s Independence Day as well as Solidarity Day with our Kashmiri brothers who are fighting for their right to self-determination for the last seven decades. Fourteenth August is an important date in the history of the Sub-continent, as on this day in 1947, the dream of an independent Pakistan became a reality. Ambassador Qazi informed that 15thAugust would be commemorated as “Black Day” to show solidarity with the oppressed people of Indian Occupied Kashmir. He invited all members of Pakistan community as well as the people of Turkey for Quran Khawani which will be held at Pakistan Embassy Ankara on 15thAugust at 1800 hours to be followed by a candle light vigil.

Moreover, “Atakule,” one of Ankara’s landmarks, its tallest tower, and its best lit building, is carrying messages of Pakistan-Turkey solidarity during 13, 14 and 15 August nights. Atakule is situated on Jinnah Road that also has Quaid-e-Azam Muhammad Ali Jinnah’s monument right opposite to it.

Meanwhile, the President of Pakistan has conferred Pakistan’s prestigious civil award “Sitara-i-Quaid-i-Azam” upon Mr. Ali Sahin and Mr. Muhammed Balta for promotion of Pakistan-Turkey ties. Both are members of the Turkish Grand National Assembly. Similarly, President of Pakistan also conferred Sitar-i-Imiaz upon Dr. Selami Kılıç for his services to Pakistan.