Born in 1927’ he survived for 87 years. Breathed his last on 28th October, 2014, Educated in Barailly, he had to struggle hard to make his life a success.

Possessed innate flair of journalism. Started his career in Daily Tanvir of Lucknow (India). Also worked with ORIENT PRESS OF INDIA – the only Muslim news agency at that time. Participated in All India Muslim Editors Conference in Delhi in April, 1947.

Having migrated to Karachi, he worked as a press reporter under the guidance of renowned journalist Zamir Siddiqi. He rose to the position of Chief Reporter in Daily JUNG and Civil and Military Gazatte. 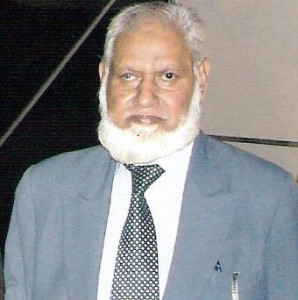 Also worked for Nawae-Waqt, Lahore, Pakistan Observer, Dacca and Daily Gujrati (Karachi ). It was 1949, when he was an office bearer of the Association of Foreign Newspaper and Karachi Press Reporters Association in 1952.

In 1955 participated in BANDUNG Conference in Malaysia representing Pakistani Dailies where he met the Late Tanko Abdul Rahman in his office. Later he was reporting for Malaysian Newspaper MERDEKA. By 1955, he became close to Pakistan’s grand politician Huseyn Shaheed Suhawardy, President of Awami Leage. At his stance, Daily Newspaper Awam was published under his ( my father’s ) supervision. Established his own enterprise and published monthly magazine “ Trade Chronicle”. As a seasoned journalist, he travelled widely in East and West. With his uncanny knack, he could woo any personality. He spent a purposeful life.

May his soul rest in peace – Ameen

Posted in From Editor's desk.