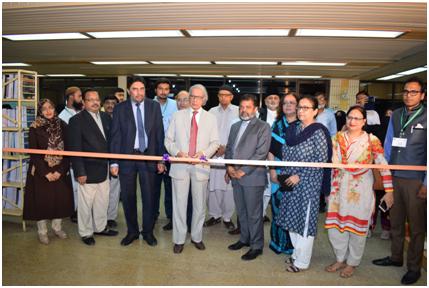 On the occasion of 21st martyrdom day, October 17, 2018 of Shaheed Hakim Mohammed Said a 3-day Book and Literary Fair from 16 to 18 October; Discussion on his life and achievements; contribution in development of education; programs of arts and dramas were held in his memory on the same 3 days at Bait al-Hikmah Library, Hamdard University, Madinat al-Hikmah, Karachi.

Speaking on the occasion, Prof. Dr. PirzadaQasim, Vice Chancellor, Dr. Ziauddin Medical University and former Vice Chancellor, University of Karachi, who also inaugurated the 3-day Book and Literary Fair, said that book fairs andliterary activities were a creative act and essential part of our civilization, which helped our society to move forward. Every age had some blessings and Hakim Mohammed Said was a blessing of our age as he was a role model and a physician par excellence too, who gave relief from ailment to countless patients and also provided social relief to the poor and the needy to make our society healthy and comfortable, he said, adding that he indeed, was a reformer as he promoted positive thinking in our society and tried to change people’s mindset.

‘We should keep open the doors of literature in our society, because it is the literature that makes society better, tolerant and peaceful’, he observed.

Prof. Dr. Shabeebul Hasan, Vice Chancellor, Hamdard University said that fondness and liking for books and promotion of reading habit were essential for the progress of a society; that’s why Shaheed Hakim Mohammed Said first of all had built a library, Bait al-Hikmah in the city of education, science and culture — Madinat al-Hikmah, Karachi.

A mushaira, presided over by Prof. Dr. Pirzada Qasim was also held on this occasion, in which renowned poets, Fayyaz Zaidi, Anwar Shaoor, Fatima Hasan, Shadab Ahsani,, Haider Hasnain Jaleesi and Tasnimul Firdaus and poet students of Hamdard University, Idris Almati, Hakim Mohammed Idris recited their poetry and received a lot of applaud from the audience. Distinguished guests, teachers and students of Hamdard University in a large number attended the inaugural function and mushaira.

A discussion on the same day on the life, achievements and literary services of Hakim Said was held at the auditorium, Bait al-Hikmah Library and participants of discussion were Rafi-uz-Zama Zubairy, former director, Hamdard Children’s Literature and Prof. Nigar Sajjad Zaheer, former head of History Department, University of Karachi.

Highlighting the achievements of Hakim Mohammed Said, Rafi-uz-Zama Zubairy said that Hakim Said had done the work which should have been done by the governments and had the affairs of government handed over to him, he would have done miracles for the education, health and welfare of the people. Answering to a question he said that Hakim Said’s travelogues for children were very popular not in children but in adults also, being very informative. The purpose of writing those travelogues of Hakim Said was to give children latest information about the modern world to winden the scope of their minds and to inculcate in their minds the ‘love for their homeland, to create self-confidence and determination in them to change their fate.

Praising the role of HamdardNaunahal, a children magazine, launched by Hakim Said for the training of children, Prof. NigarSajjadZaheer said that she read this magazine, her children too and now her grandchildren were reading this which was a popular magazine of children and its famous column. “JagoJagao:, written by Hakim Said was an outstanding piece of literature and because of this, Hakim Said was a benefactor of us and our children, who made reading and writing ‘a journey of love’.

Commending the books, published by Hamdard Foundation Pakistan under the supervision of Hakim Said, she said that the book on ‘Alberuny’ in English was a very important and masterpiece document which should be translated in Urdu for its more propagation; similarly the English book of HussainNasar: ‘Islam, Science and Civilization’ was equally important, which was translated in Urdu and published by Hamdard Foundation.

‘Hakim Mohammed Said through his books, writings and HamdardNaunehal (children magazine) still comes at and lives in each and every house of Pakistan’, she maintained.

Two dramas with the reference of ‘Hakim Said Literary Fair’ were also staged by ‘Whistle Blower’ Group on the occasion.