11th BEST UNIVERSITY TEACHER AWARD, 2014 Ceremony was organized by Higher Education Commission (HEC) in Islamabad. In his address, Prof. Dr. Raza Bhatti, Director General Academics HEC briefed that after short listing from 96 applications, only 35 Government and 5 Private Sector Universities across Pakistan were found eligible to receive this award. Hamdard University is the only Private Sector University among them from the Province of Sindh to receive this Honour.  The award was presented to Assistant Professor Hakeem Syed Zahoor Ul Hassan Zaidi from Faculty of Eastern Medicine of Hamdard University. The Governor KPK, Chairman HEC and Director General Academics presented the awards. This was not only the success as an individual, but a success for Eastern Medicine as well. Awardees of this award is a pioneer, who has opened a door for others to gain such success and prove their field, in the competent era. The significance of Eastern Medicine has been proved and enlightened by this award. 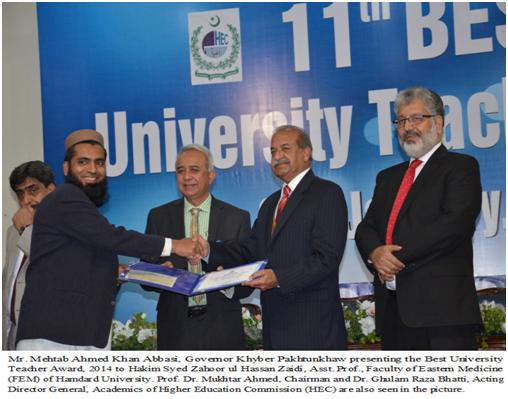