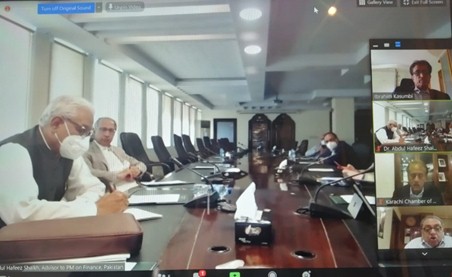 The Karachi Chamber of Commerce & Industry (KCCI) was given assurance by Dr. Hafeez Shaikh that the upcoming budget for FY2020-21 will be a Relief Budget and most of the recommendations of KCCI will be adopted in the budgetary measures to be announced by the government on 12th June 2020.

The assurance was given in a meeting held on Monday via video link between the KCCI’s team led by Chairman Businessmen Group & Former President KCCI Siraj Kassam Teli with Advisor to Prime Minister on Finance and Revenue Dr. Hafeez Shaikh, to deliberate on the proposals of KCCI for the Federal Budget 2020-21. On KCCI’s side, Siraj Teli was accompanied by President KCCI Agha Shahab Ahmed Khan and Former Senior Vice President Ibrahim Kasumbi. Officials of the Finance Ministry and Chairperson Federal Board of Revenue Ms. Nausheen Jawed were also present at the meeting which lasted for more than 40 minutes.

In his opening remarks, President KCCI Agha Shahab Ahmed Khan stated that the budget for the year 2020-21 is being prepared at a time when the country is facing an unprecedented crisis due to Covid-19 pandemic and every business and industry has been badly affected. In these extraordinary circumstances, people of Pakistan in general and the business community in particular are looking forward to a budget which provides substantial relief measures to rescue the economy from the brink of disaster.

Chairman BMG Siraj Teli highlighted major macroeconomic issues during the meeting and elaborated on the measures which KCCI has recommended to rescue the trade and industry from devastating impact of a global economic meltdown caused by the spread of Covid-19 pandemic. He reiterated that today the Name of the Game is survival of trade and industry which should be on top priority in the budget rather than the revenues. Revenues can be recovered later only if the trade and industry survives hence the budget should focus on relief through these macroeconomic measures.

He said that the domestic economy, which contributes 92 percent to the GDP and provides bulk of employment and revenues, has not received the much needed relief and financial assistance. He appreciated the reduction in prices of Petroleum products which was earlier proposed by KCCI and also the financial assistance given to the poor segment of population through Ehsaas program which provided much needed relief to the people.

Siraj Teli proposed that an across the board reduction of 50% in the rates of all Taxes including Income Tax, Sales Tax, FED and Customs duties on capital goods and raw materials should be announced in the Budget for one year. Further, he suggested that rates of Electricity and Gas should also be reduced to half for at least one year to help revive the domestic economy. These measures may be reviewed when the economy shows improvement.

Commenting on the incentive scheme announced by the government for Construction Industry, Siraj Teli urged the Advisor Finance that similar incentives should be announced across the board for all sectors. He stated that undocumented economy in Pakistan is twice the size of documented economy and a very large amount of capital is blocked in unproductive investments.

He said that it would immensely benefit the economy to release the blocked capital and encourage investments into all sectors of industry and business. The unregistered persons in undocumented economy must be encouraged and allowed to get registered and become part of the documented economy. As an incentive, a policy be adopted that no questions will be asked for all such investments. In the present global crisis due to Covid-19 pandemic, no objections are likely to be raised by IMF, World Bank, G20 and FATF etc. It is therefore a good opportunity for Pakistan to unlock a huge untapped pool of capital.

Siraj Teli further added that although the interest rates have been revised downward by the SBP from 13.25% to 8.0%, it is still not sufficient to stimulate the growth. Reduction in interest rates in piecemeal and installments does not provide the desired impetus to growth. To provide thrust the policy rate should be reduced to 4% in one go to stimulate growth and reduce cost of doing business. All major economies are taking extra-ordinary measures to reverse the decline due to Covid-19 pandemic through quantitative easing and interest rates are down to Zero.

In his presentation, Former Senior Vice President KCCI Ibrahim Kasumbi elaborated on various important proposals of the KCCI for the budget 2020-21. These proposals included rationalization of tariff and WHT on industrial raw materials and capital goods, expeditious disbursement on Income Tax Refunds and enhancement of the limit of Rs.5.0 million, prioritizing of refunds on the basis of aging of cases, removal of automobile and motorcycle spare parts from third schedule of Customs Act, reduction in rate of Sales Tax and removal of RD on smuggling prone items.

In his response to the proposals and suggestions submitted by the KCCI item, Dr. Hafeez Shaikh said that despite the limitations of fiscal space, the Ministry of Finance has approved and adopted a significant number of KCCI’s proposals on the recommendation of the Federal Board of Revenue. He emphasized that the government is keen to stand by the business community in these difficult times and maximum relief will be provided in the budget of FY2020-21. On the question of Income Tax refunds, Dr. Hafeez Shaikh stated that the Ministry of Finance is looking to enhance the amount of refund from Rs5.0 million up to Rs50.0 Million, depending on the available fiscal space.

In her comments, Ms. Nausheen Jawed, Chairperson FBR informed the KCCI team that their proposals were duly considered and a number of important proposals have been accepted for inclusion in the budgetary measures for FY2020-21.

Dr. Hafeez Shaikh thanked Siraj Kassam Teli and Agha Shahab Ahmed Khan for a productive meeting and participation of the KCCI team. He further assured that he will be available to discuss any issues and remaining anomalies after the budget has been presented in the parliament.

Siraj Kassam Teli, expressed his profound gratitude to Dr. Hafeez Shaikh for the time spared by him and Ms. Nausheen Jawed, Chairperson FBR, to have a detailed discussion on the budget proposals of KCCI. President Agha Shahab also thanked the Advisor to PM on Finance and the Chairperson-FBR for having a productive meeting with KCCI.