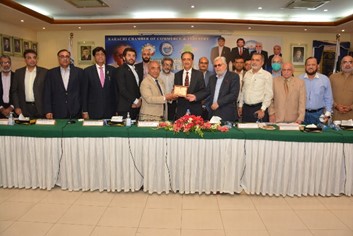 Managing Director of Sui Southern Gas Company (SSGC) Imran Maniar has said has that gas crises being faced during the winter season were likely to continue for one to two more years until the new terminals for RLNG get installed at the Port.

There were difficulties and challenges but the picture is rosy as upon completion and activation of Terminal III at the Port and if the SSGC decides to make a commitment with terminal owner only if consumers of SSGC pledge to buy the additional 500 mmcf, it would certainly help in resolving gas shortage issue being suffered by all types of consumers in Karachi, he added while exchanging views at a meeting during his visit to the Karachi Chamber of Commerce & Industry (KCCI).

While highlighting the overall gas demand-supply situation, MD SSGC informed that a total of 4,000 mmcf gas including indigenous gas and RLNG was being used all over the country, of which around 950 mmcf was being provided to SSGC from indigenous resources in Sindh and Baluchistan while 150 mmcf of RLNG was also being given to them and the rest of gas was being used by SNGPL. SSGC takes 110 mmcf from natural resources in Baluchistan while the rest of 75 percent gas comes into the system from resources in Sindh but these gas reserves were depleting fast at a rate of 10 percent per annum.

He said that SSGC takes around 150 to 180 mmcf RLNG from two terminals at Port Qasim but the supply shrinks to 70 or 80 mmcf from these terminals during winter and the demand for gas in Baluchistan rises to 120 mmcf which creates an overall gas shortage of around 195 mmcf. To deal with gas shortages, the Ministry has designed a mechanism in which all the consumers from domestic to industrial have been ranked from top to bottom in which domestic consumers were at the top of the list, followed by export-oriented industry while CNG stations were at the bottom of the list and non-export industry was above CNG stations.

Therefore, SSGC carries out load management during winter season exactly as per list provided by the Ministry whereas RLNG supplies to KE are completely cut to zero that helps in covering the gas shortage by 75 to 80 mmcf whereas suspension of gas to CNG stations further saves 20 mmcf that leads to reducing the gas shortfall by 95 mmcf, out of a total shortfall of 195 mmcf, he added.

He further pointed out that there was a tremendous push to get villages gasified which requires significant investment of billions of rupees and huge resources including workforce and equipment who have to be sent to remote areas and villages.

He further said that the industry was paying 70 to 80 percent of gas being consumed by the domestic consumers as the gas tariff for domestic users was very low and less than any other consumers all around the world including Qatar and Iran as it was being subsidized by the industry.

Speaking on the occasion, Chairman BMG Zubair Motiwala pointed out that the first and foremost problems being faced by gas consumers was the low gas pressure in the industrial zones of Karachi which has created a serious havoc and the entire industry was unable to meet its requirements including the efficiency benchmarks and delivery time that intensifies the sufferings for the exporters. “As winter season is just ahead, what will happen to gas pressure during winter and what is the current condition of gas supply”, he asked.

Zubair Motiwala said that the data of last one decade indicates that 1200 mmcf of gas was available from indigenous resources ten years ago when the industries were utilizing around 385 mmcf gas and then around 7 years ago, a decline to 335 mmcf was witnessed in the industrial consumption which later on picked up but to date, the maximum industrial consumption was not more than 400 mmcf.

“We are concerned about the future as the demand for gas continues to rise because the industries have imported huge number of machines to enhance their production thanks to government policies but all these machines are going to require energy including gas and electricity so what is going to happen and what is the energy scenario for these machines which have been imported”, he said, adding that machineries worth US$1.5 billion dollars has already arrived, of which machineries valuing around US$400 to US$500 million have already been installed and started production whereas more machines worth US$1.5 billion were also in pipeline which would require more gas.

He was of the view that demand from industries during winter remains intact yet the industries suffer the most which was not a correct approach. The demand for gas rises in Baluchistan to 200 mmcf from around 40 to 50 mmcf and it also increases in Sindh during winter season. Hence, the gas shortage was not because of rise in demand by the industry but purely due to enhanced consumption by domestic users. “Despite staying stagnant in terms of gas demand, supply to industry is curtailed and we are compelled to suffer. We don’t want more gas in winter, we want the same quantum of gas in winter at adequate pressure”, he added.

Zubair Motiwala further stated that the five zero rated sectors agreed on a tariff of 6.5 dollars for RLNG gas which was available to entire Pakistan but SSGC has denied this tariff and the export-oriented industries falling under SSGC’s franchise have been compelled to use RLNG at exorbitant rate which was not affordable. “In this situation, when we are deprived of receiving RLNG, we might have to shift to SNGPL network.”

He further expressed apprehensions over gas connections being given to new buildings which was going to intensify the hardships for industries because as per policy, supplying gas to domestic consumers was the top priority which means that the industries were going to suffer further curtailment due to more supply of gas to new domestic consumers. “All the new buildings should be provided gas via alternate means like bousers and the storage facility can be established at the basements of new buildings whereas the domestic consumers must be advised to switch over from gas-run geezers to solar-run geezers as successfully done in many countries all around the world”, he added.

President KCCI Shariq Vohra, while welcoming the MD SSGC, said that gas has become a serious issue as Pakistan’s natural gas reserves were rapidly depleting while the gas distribution system of SSGC was in a pathetic state, causing severe line losses which was due to the fact that SSGC, which was once known as the best utility service provider company, has been through terrible circumstances during the last 10 years. SSGC has to define effective strategies to control waste of natural gas resources and theft in order to save the economy and the industry from severe losses, he added.