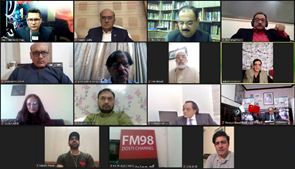 Speaking on occasion, former Defense Minister and renowned defence analyst Lt. Gen. (retd) Naeem Khalid Lodhi said that during the last 70 years, bilateral relations between Pakistan and China have strengthened with the passage of time, and no ambiguity have ever been found between the two countries. He said that the soldiers of the Pakistan Army and the People’s Liberation Army of China worked tirelessly for the construction of the Karakoram Highway. Lieutenant General (retd) Naeem Khalid Lodhi said that China is fully supporting Pakistan in the military field. The JF-17 Thunder fighter jets is a prime example of friendship between the two countries. China is also preparing warships and other military equipment for Pakistan.

CEO, Board of Investment KPK, Hassan Dawood Butt, while expressing his views during the webinar, said that the bilateral relations between Pakistan and China are unique, based on win-win cooperation and such element reduces the chances of failure. He said that regardless of the global situation, bilateral relations between the two countries have been solid and cordial while both the countries want to strengthen each other. Hassan Dawood Butt said that construction work under CPEC on long-term and medium-term projects across Pakistan is in full swing. At the same time, the two countries have benefited greatly from each other’s experiences under CPEC.

Commenting on China’s space technology, Head of Global Navigation Satellite System Program at the Institute of Space Technology, Dr Najam Abbas Naqvi, said that in addition to the missions sent by China to Mars and the Moon, the establishment of the Chinese Space Station Fully reflects the progress in this sector. He said that there is scope for further enhancing bilateral solid cooperation between China and Pakistan in education and science, and technology. Dr. Najam Abbas Naqvi said that Pakistan and China are cooperating in the space technology sector, under which Pakistan will soon reach the moon with the help of China.

Speaking on occasion, Former Vice-Chancellor of Agricultural University Faisalabad, Prof. Dr Muhammad Ashraf, said that bilateral relations between China and Pakistan are based on the principle of peaceful coexistence and have become stronger over the last 70 years. He said that bilateral cooperation in the field of agriculture and biotechnology is going on between China and Pakistan. Dr Muhammad Ashraf said that the share of agriculture in China’s GDP is 7.7 percent, while that of Pakistan is 18 percent. He further said that memoranda of understanding had been signed between Pakistan and China in biotechnology, following which progress has been made in the agricultural sector of Pakistan.

On this occasion, Editor-in-chief of Ittehad daily, Tahir Farooq said that Chinese President Xi Jinping’s vision of One Belt One Road Initiative is of utmost importance, which would benefit not only China but also other countries in the region. He termed the construction of Rashakai Economic Zone under CPEC as very important and a significant milestone in Pakistan’s economic development.

Speaking in the webinar, the first female General Secretary of Pakistan Federal Union of Journalists, Fauzia Shahid, said that bilateral relations between Pakistan and China are based on trust-building while today there are hardly any two countries in the world between which have a bilateral relationship in all areas during the last 70 years. She said that Pakistan and China have similar views on global issues. Referring to the Afghan conflict, Fauzia Shahid said that China has shown great responsibility in this matter and has taken the path of moving forward in a friendly atmosphere.

On occasion, Editor-in-Chief of the Daily Mail Makhdoom Babar said that the friendship between China and Pakistan is everlasting and the people of the two countries have a strong relationship. He said that over the last 70 years, bilateral relations between Pakistan and China had been further strengthened, especially after the launching of CPEC project. Makhdoom Babar said that today the Chinese people are giving priority to learning Urdu so that the friendship between the two countries can be further strengthened. He said that the Chinese media has become active today, from where those who speak against China are given a full answer.

Addressing the webinar, senior journalist of “The News” Lahore, Mian Saif-ur-Rehman, said that there is an everlasting friendship between Pakistan and China. He said that he has made several visits to China during which he found China a different country each time, which is a proof that China is constantly developing. Mian Saif-ur-Rehman said that he had various discussions on different topics with the Chinese media and they consider Pakistanis as their brother. Saif-ur-Rehman said that China is further developing with Chinese characteristics, while the country is ready to provide all kinds of technology to Pakistan. He said that FM-98 played an important role in further strengthening the friendship between Pakistan and China.

Group Editor of Al-Akhbar daily and Herald daily, Riaz Ahmed, while expressing his views, said that the remarkable progress made by China during the last 70 years is an example to the world. In this regard, the Communist Party of China and Chinese President Xi Jinping played a key role. He said that the development of Chinese media during this period is an example for us, while the exchange of media representatives between the two countries will help us understand each other.

Famous musician and singer Zeek Afridi, while participating in the webinar, said that there is a need for more bilateral cooperation between China and Pakistan in music. He said that maximum collaboration should be extended between Pakistan and China in music so that people-to-people contacts would be further strengthened.