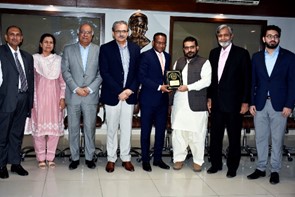 Ambassador of Ethiopia Jamal Baker Abdullah has said that Ethiopia is the gateway of African countries, and Pakistani investors will be provided with more opportunities than the European market. The Industrialists will get the cheapest electricity in Ethiopia. He expressed these views during his visit to the Korangi Association of Trade and Industry (KATI).

Ethiopian Ambassador Jamal Baker Abdullah added that business people do not pay attention to the opportunities of the African market and are busy trying to gain access to other markets. He said that, like Pakistan, Ethiopia has an important strategic location, but there is a lack of connectivity between the two countries. The ambassador of Ethiopia said they would conclude a joint chamber agreement with Pakistan. At the same time, Ethiopia closed several embassies in Europe but is going to open an embassy in Pakistan which explains the importance of Pakistan for Ethiopia.

Sindh Chief Minister Murad Ali Shah wants to bring a trade delegation to Ethiopia under his leadership. He said I wish that KATI industrialists must join this delegation and visit Ethiopia. Jamal Baker Abdullah added that there would be an agreement to start Ethiopian Airlines flights next month. He showed interest in seeing the Defense Exhibition IDEAS 2022, to be held in Karachi next month, and is interested in buying defence equipment from Pakistan. He said that very soon, the President or Foreign Minister of Ethiopia will visit and formally inaugurate the embassy in Pakistan.

Earlier, KATI President Faraz-ur-Rahman said that Pakistani business people going to the European market for trade in dollars should focus on African markets because there are immense opportunities. He said that by starting flights of Ethiopian Airlines, access to African countries would be possible, increasing bilateral trade enormously. He said that Ethiopia’s economy is mostly based on imports, which will be a huge market for Pakistan’s agricultural, textile, medicine and other sectors. Instead of the European market, the world’s investors are now paying attention to the African market. India also greatly promotes diplomatic relations and trade with African countries.

Zubair Chhaya, CEO of Kite Limited, said we are delighted that the Embassy of Ethiopia was established. Pakistan imports coffee from Ethiopia; both countries must exchange delegations to promote trade. He said he was very grateful for the assistance of the Ethiopian ambassador to the flood victims.

Honorary Consul General of Ethiopia Ibrahim Tawab said that it is very important to establish a joint chamber between Pakistan and Ethiopia. He said that the Trade Development Authority of Pakistan (TDAP) should organize single-country exhibitions to showcase Pakistani products in Ethiopia so that the business people and investors of the two countries can connect. At the same time, the start of flights between the two countries will create numerous opportunities.

UBG leader Khalid Tawab said there are many opportunities for trade in Ethiopia when the Ethiopian government should consider lifting the ban on trade in medicines and raw materials.

The acting chairman of the standing committee, Muslim Mohammadi, said that there had been relations between Ethiopia and Pakistan for 45 years, but the trade volume is very low. There is a lot of potential in the auto sector, especially from Pakistan; recently, the Sazgar rickshaws were imported into Ethiopia. Similarly, we can work on numerous such products.