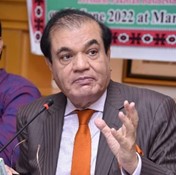 Chairman of National Business Group Pakistan, President Pakistan Businessmen and Intellectuals Forum, All Karachi Industrial Alliance, and former provincial minister Mian Zahid Hussain on Friday expressed concern over the continued retreat of the rupee against the dollar, which is resulting in inflation and other problems. However, the fall of the rupee is also generating additional resources for the government in the form of customs duty and sales tax, he said.

He said that concrete steps are needed to increase the country’s exports and remittances to keep the currency stable; otherwise, the already weak economy will deteriorate further.

Talking to the business community, the veteran business leader said that the government could not give the required attention to the economy due to the endless political turmoil.

Apart from this, the rupee value is decreasing due to dollar smuggling, increased trade deficit, lack of investment, and non-fulfilment of promises by friendly countries. At the same time, the IMF loan did not stabilise foreign exchange reserves as expected, he added.

He noted that the government lifted the ban on luxury goods under pre, allowing lower dollars to flow out of the country while imposing regulatory duties to control imports has also yielded nothing.

Mian Zahid Hussain further said that India, Bangladesh and dozens of countries control imports through import tariffs, but this is not happening in Pakistan.

He said that the flood victims are not getting the attention they deserve. More than one million houses have been completely or partially destroyed, more than eight million cattle have been killed, and eighty out of one hundred and sixty districts have been affected by floods, which have been declared disaster-prone.

Three thousand kilometres of roads and one hundred and forty-five bridges have been washed away, while two million acres of crops have also been destroyed.

In these circumstances, there is a need to keep a significant amount of money in the budget for relief and reconstruction. Due to the high dollar value, the government receives an additional hundred billion rupees per month through customs duty and sales tax.

If a mo that if a monthly targeted subsidy is provided to every family, these people can be rehabilitated. Zahid Hussain said that various diseases, including cholera, diarrhoea, dengue and corona, are emerging in the flood-affected areas, and the victims are forced to live under the open sky, hungry and thirsty.

The international community also needs to wake up to the problems faced by humanity.