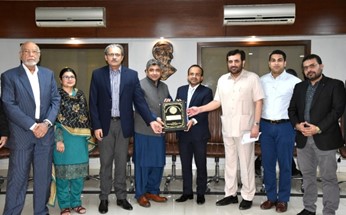 Chairman EOBI Shakeel Magnejo said that the welfare of the employees is the top priority and in this regard, we will solve the problems in consultation with the industry. A committee will be formed in consultation with all stakeholders comprising representatives of government, industrialists, employees, and EOBI. He said Harassment of industrialists is not acceptable, want the country’s industries to develop so that employment opportunities will be created.

Chairman EOBI said that the perception that more payments are made from the contributing industries is wrong. The self-assessment scheme will provide 2 years of relief to the audited industrialists.

Earlier, KATI President Salman Aslam welcomed Shakeel Magnejo to KATI and said that a large number of employees come to Korangi Industrial Area for employment. But the dues are not paid while the huge amount is also deducted. President KATI said that complaints were also received from the industrialists that EOBI officials were harassing them.

Salman Aslam hoped that Shakeel Magnejo would play an important role in solving the problems of industrialists and employees.

Former President and Chairman of the Standing Committee Zahid Saeed said that EOBI should also include new industries to increase the fund so that no further burden should be placed on the industrialists who are already paying contributions. He called for a solution for the litigation between the EOBI and the industrialists.