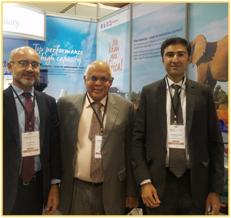 Atlas Battery, the leading battery manufacturer of Pakistan participated in the 3rd edition of Automechanika South Africa that took place in Johannesburg at Nasrec Expo Centre from 18th to 21st of September, 2019.

With 17 shows in 16 countries, Automechanika is the world´s biggest B2B trade fair brand and is an ideal place for presenting products and services, and for networking.

Atlas Battery participated at the said event under the banner of TDAP (Trade & Development Authority Pakistan) to introduce the widest range of lead-acid batteries in the region, from four-wheelers and two-wheelers to deep cycle and solar batteries.

Being the only battery manufacturer from Pakistan, this was Atlas Battery’s second time at Automechanika South Africa where they got a chance to not only display their products but also educate people about their offerings. The affordable price factor coupled with Japanese technology from GS Yuasa attracted a lot of buyers from places like Zambia, Kenya, Botswana, Mozambique, Belarus, and within the country from Durban, Cape Town and Port Elizabeth.

General Manager Marketing, Mr. Mohsin Khan believed that it is integral for the company’s growth to participate in such endeavours that strengthen their global presence.

Brand Manager Saqib Khan remarked that not just South Africa but the entire African continent is ideal for Pakistani products and that it is the perfect opportunity for all Pakistani companies to bring in the much-needed foreign remittance to boost our ailing economy.

Part of the Atlas Group that comprises of 16 companies, Atlas Battery is in the business of making automotive and motorcycle batteries with the brand name AGS in collaboration with GS Yuasa Japan. It caters to both the commercial and OEM sector which includes popular brands Honda, Toyota, Nissan, Suzuki, and Land Rover.