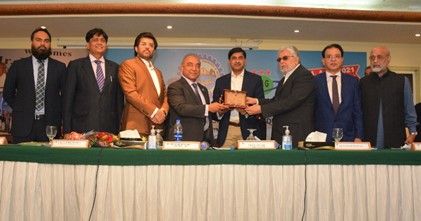 Administrator Karachi Metropolitan Corporation (KMC) Laeeq Ahmed, while responding to the hardships being faced by displaced shopkeepers whose business premises were razed in the anti-encroachment drive, announced to form a committee comprising KMC and KCCI representatives so that the issues on the relocation of businesses at irrelevant markets, delays in handing over possessions, notices by the anti-encroachment department and other issues could be discussed and resolved at the earliest so that the affected businessmen could quickly return to normalcy.

While seeking nominations from KCCI for the proposed Committee during his visit to the Karachi Chamber of Commerce & Industry (KCCI) on Monday, Administrator KMC assured that KMC was trying its best to hand over possessions of the allocated shops to affected shopkeepers as soon as possible.

Administrator KMC Laeeq Ahmed said that despite limited resources and revenue, KMC has been striving hard to improve Karachi’s road infrastructure by carrying out maximum patchwork. In contrast, the street lights have also been made operational at 26 roads of the city.

Citing a few examples of public-private partnership, he stressed that civil society and the private sector must come forward to join hands with KMC to improve the living environment of Karachi.

He informed that KMC would also be signing a Memorandum of Understanding (MoU) with the United Nations Development Program (UNDP), making Karachi the second city to sign such an MoU as UNDP has signed a similar MoU with Istanbul city only.

Referring to concerns expressed over numerous issues which were falling under the ambit of DMCs, he proposed to summon a grand meeting in which representatives of all DMCs, KMC Officials, KCCI’s representatives and other stakeholders can be invited so that they all could thoroughly discuss and mutually agree on effective strategies for dealing with parking, road cutting and other civic issues particularly those falling outside the dominion of KMC.

Laeeq Ahmed, while replying to a question raised over unavailability of fire fighting vehicles, informed that although the Fire Fighting Department has sufficient vehicles now but the drivers needed to run these vehicles were unavailable and the available staff was aging who cannot be given the responsibility to drive the newly acquired fire fighting vehicles. “We are aware of this issue and would add young drivers in the fire department so that this issue could be resolved and the response time in case of any fire incident could be reduced”, he added.

Chairman BMG Zubair Motiwala, in his remarks, offered KMC Administrator that KCCI, being the premier chamber, can give representatives from every single market of the city and also provide volunteers from all the markets who can cooperate and work closely with KMC which would speedily resolve many civic related issues.

Keeping in view the huge revenue being contributed by Karachi to the national exchequer, he stressed that funds being allocated to Sindh province in the NFC award have to be bifurcated in such a manner that Karachi receives a separate share as per its contribution. The enhanced funds allocated to Karachi only directly from NFC Award can be transferred to local government, KMC and DMCs, which would surely help in dealing with the liquidity crunch and drastically improve the infrastructure situation of Karachi.

He further requested the Administrator KMC to postpone the new anti-encroachment drive as it was not the right time to start another anti-encroachment movement in the city because businesses were already suffering badly due to the disaster caused by the COVID-19 pandemic and were struggling hard for their survival while the balloting performed for allocation of premises to displaced shopkeepers of previous anti-encroachment drive also needs to be reviewed as many businesses have been allocated spaces at irrelevant markets.

He also extended full support and cooperation of Karachi Chamber to Administrator KMC in all his initiatives for improving the infrastructure and living environment in Karachi.

Vice-Chairman BMG Anjum Nisar stated that despite contributing a massive revenue of 70 percent, many city localities, particularly the industrial zones, give a war-torn impression as road infrastructure was almost inexistent, and nobody comes forward to own the city, which was problematic for the business community. “To deal with this issue, a relief package of Rs1100 billion was announced, but to date, we have not seen where exactly these funds were utilized. The government has to do something for Karachi very seriously and urgently on SOS basis for making it not an ideal but a viable city”, he added.

General Secretary BMG AQ Khalil said Karachi was being treated like an orphan as the city remains deprived of basic infrastructure facilities. “The city lacks proper public transport and faces parking issues while the roads, underpasses, gardens and educational institutions are in awful state”, he said, adding that the solution for all these problems lies in holding the local government elections as soon as possible otherwise the problems would keep on intensifying.

President KCCI Shariq Vohra, while welcoming Administrator KMC, pointed out that the infrastructure problem often causes severe traffic jams at some of the busiest roads of Karachi which creates law & order situation as the culprits get a perfect opportunity to easily snatch valuables from commuters stranded in traffic jams.