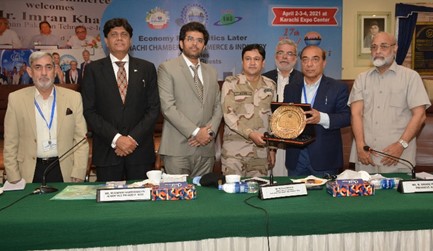 e (ANF) Karachi Muhammad Ayub has said that ANF was trying its best to facilitate the exporters and importers by reducing the number withheld containers. Besides at the same time, no compromise was being made on the performance which can be gauged from the fact that number of containers put on hold has been reduced to just 1.14 percent while 11 seizures were also done at all ports in 2020 by the ANF in which huge quantities of opium, hashish, ice, Xanax tablets and other illicit drugs were seized.

Exchanging views at a meeting during his visit to the Karachi Chamber of Commerce & Industry (KCCI), he added that during the last three years, maximum efforts were made under his supervision to facilitate traders by completely eradicating useless practices and reducing unnecessary paperwork, besides maintaining constant interaction with representatives of all trade associations and chamber of commerce so that any issue being faced by the business community could be speedily resolved on the spot.

Responding to concerns expressed on poor repacking after ANF’s examinations, he informed that cargo repacking was the responsibility of terminal authorities who are usually least bothered to pay attention to this serious issue. Excluding Port Qasim where a team of professionals has been hired for cargo repacking, ANF has been receiving repacking complaints against all other terminal operators and the highest number of complaints were being received against South Asia Port Terminal (SAPT). Although the terminal operators charge heavily in dollars but they were least bothered to resolve the repacking issue, he added.

He further stated that ANF has no access to WEBOC which was the major reason for the delay in completing the examination procedure. “Although Customs authorities have been requested on several occasions but they are reluctant to give WEBOC access to ANF. We neither have access to WEBOC nor Bill of Lading (BL) which means all the work is being done blindly by the ANF. Upon completion of Pakistan Single Window Project, we will hopefully get access to WEBOC which would surely help in expediting the examination procedure and facilitate the business & industrial community.

Earlier, President KCCI Shariq Vohra, while welcoming Deputy Director ANF Karachi, stated that ANF plays a major role in controlling drugs trafficking all over Pakistan and its fundamental and legal requirements constrain the institution to carry out extensive examination of goods being imported to and exported from Pakistan that sometimes creates a delusion that traders are being harassed and hurdles are being created but as an institution, ANF has to ensure Pakistan’s compliance to its international commitments towards drugs abuse and trafficking.

“ANF’s role is very crucial because of the fact that it saves Pakistan’s trade from getting maligned as any negligence towards effectively stopping drugs trafficking terribly affects our exports and imports”, he added.

Shariq Vohra, however, pointed out that goods being exported from Pakistan were poorly being repacked after ANF’s examination that results in creating a bad impression about Pakistani exporters and ultimately affects the exports. “We, the Chamber, Custom Agents, exporters, importers, terminal operators and ANF must work collectively to resolve such genuine issues being faced by the business community which must be addressed on top priority in order to improve Pakistan’s trade”, he added.

While acknowledging ANF’s improved performance as compared to what it had been few years ago, President KCCI requested the In-charge, Port Control Unit ANF that KCCI, Custom Agents and all other stakeholders must be taken on board and any changes in ANF’s policy for examining consignments may please be notified before implementation so that the exporters and importers could accordingly comply with the changes.

He said that it was a matter of grave concern that 30 percent of the cargo selected for examination was being checked physically while only 5 percent passes through scanners. In the era of technology, modern machines/ scanners have to be installed at the ports to expedite the examination procedure and save consignments from getting damaged due to manual checking.