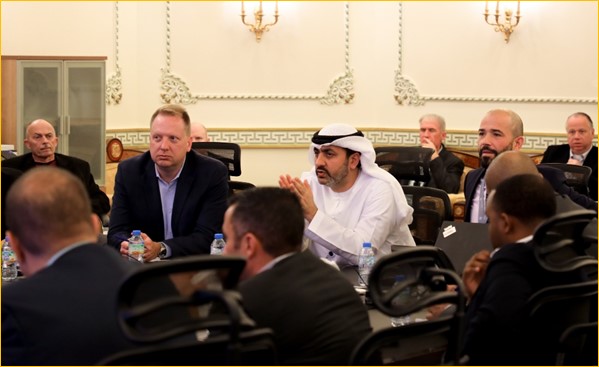 Abu Dhabi Airports has hosted a visit by a senior delegation from the United States Customs and Border Protection (CBP), led by Clint A. Lamm, CBP Director of the Preclearance Field Office, who visited Abu Dhabi International Airport and toured its U.S. CBP Preclearance facility in Terminal 3.

The visit was a part of the CBP’s annual Port Director Summit, and was a manifestation of the strong ties and close cooperation between Abu Dhabi Airports and the U.S. CBP, who have been working together since the opening of the award-winning preclearance facility at Abu Dhabi International Airport in January of 2014.

Mohamed Nasser Al Otaiba, Deputy Chief Operations Officer
at Abu Dhabi Airports, said: “We were delighted to host Clint Lamm and his colleagues from the U.S. CBP at Abu Dhabi International Airport, and have the opportunity to showcase our achievement of winning the outstanding joint project category for the U.S. CBP in the Abu Dhabi Award Excellence in Government Performance 2015.
The delegation’s visit is symbolic of the close economic and social ties between the United Arab Emirates and the United States, and we look forward to continuing to work closely with our counterparts at the U.S. CBP.”

Mr. Clint Lamm, CBP Director of the Preclearance Field Office, said: “We chose Abu Dhabi, UAE, for this summit because of its unique location and operating model, its robust enforcement posture, and our strong local relationships to discuss opportunities to imagine, influence, and innovate better ways to do CBP business. There aren’t many locations that can provide Port Directors with a comparably fertile environment to promote leadership development for our agency. Abu Dhabi Preclearance is an archetype of Preclearance enforcement operations and transformative business practices and partnerships such as we have with the UAE and Abu Dhabi Airports.”

The U.S. CBP preclearance facility at Abu Dhabi International Airport is the only one of its kind in the Middle East, Africa and Asia. It continues to be popular with passengers connecting through Abu Dhabi who enjoy being able to avoid lengthy queues upon arrival in the U.S. and have their baggage checked through to their final destination.

Passengers travelling to New York, Washington, Chicago, and Los Angeles on flights operated by the UAE’s national carrier, Etihad Airways, can take advantage of this unique service. Last year, more than 500,000 passengers passed through the facility, demonstrating its continued appeal to regional and international travelers.