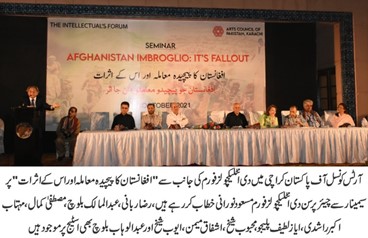 Arts Council of Pakistan Karachi and The Intellectual’s Forum organized a seminar on the complex issues of Afghanistan and its implications. The event was attended by the political leaders, literary personalities, governing body, and the members of the council.

Speaking on the occasion former senate chairman Mr. Rabbani said that, It is true that the opinion of people is paramount for any state but there are some historical mistakes which you cannot precise even if you want to. Today it seems that the Afghan war is over, but is it really over? You have seen that since the Taliban take over Afghanistan, sleeping cells have become active in Pakistan. “The United States believes that Pakistan has a hand in their defeat, but if the United States has to find the root cause, they should start an investigation with Clinton’s interview” he added.

Further speaking Mr. Rabbani Said that when the refugees came here, instead of stopping them, we settled them particularly in Sindh, and today, if we are thinking that they will go back, we are in a trance. Whenever there was talk of evacuating refugees, the Prime Minister said that we are under pressure.

Expressing his views on the occasion former CM of Balochistan Dr Abdul Malik Baloch said, “The question is that whether there will be peace in Afghanistan after the withdrawal of America? Afghanistan itself is a complicated region and of course, soon this circumstance is going to affect Pakistan. The question is will Afghanistan build a democratic and federal system? Will the media be free? Today all our neighboring countries are highly disappointed with us and we are all dependent on China, and this will have a very negative impact.

Former Mayor of Karachi and the chairman of PSP Mustafa Kamal addressing the seminar said that In our view, the war in Afghanistan is not over. People who are celebrating victory and defeat are not aware of the situation When 49 countries analyze themselves; they will realize why they are embarrassed over the situation. “Since the day Kabul was conquered, the conflicts have begun in Balochistan and Waziristan. This war should not be shifted from Afghanistan to Pakistan. If we want the best for this country we should take some serious steps, we have to end the conflicts of the government and the opposition. Millions of people have died in Karachi in the last forty years just because of the contradiction. If people still won’t own this land then we should be prepared to face the same situation as Afghans” Mr. Kamal added.

Activist Ayaz Latif Palijo said the general impression that Afghanistan is being persecuted is correct to some extent. As neighbors, all Afghanis our brothers and sisters they would never have faced these problems if they had not condemned and endured. Those who read the history of Afghanistan know that there has never been a popular government in Afghanistan; it was always ruled by some family kingdoms. The first revolution in Afghanistan was primarily an internal one, with no foreign intervention. There are many other countries on the border of Afghanistan. But the whole burden is being placed only on Pakistan.

“Our foreign policy is very weak, and the most debated, our neighboring countries are not happy with us. Whatever the problems Afghanistan is facing, they are still not considering Pakistan as their friend. Pakistan’s foreign policy became questionable. Our language, culture, and economy everything are under threat. We do not have good relations with India; we are trying to move towards Russia’s strategy. We are depending on China and China is emerging big powers in this region” said politician Mehtab Akbar Rashidi. Speaking on the occasion Ashfaq Memon said that the question is why it happened in Afghanistan that after the US had been there for such a long time that they had to leave within a period of two and a half years. There are some things that complicate matters. Afghanistan today is not what it was twenty years ago. We have to understand where Afghanistan is going.

Dr. Prof Mehboob in his speech said “No matter whoever is leading the government of Pakistan or Sindh, and whatever improvements they will try to make but no one can handle the population of this city with the limited resources we have, no matter who the administrator is, ۔ Refugees are coming to this on a daily basis. Whatever the situation in Afghanistan, not a single refugee should come to Karachi. The government should set up tents on the borders to help Afghans as humanitarian aid. The three million Afghan refugees we have should also get back now.

Dr. Ayub Sheikh said the history of Afghanistan is 5000 years old, No government in Pakistan knows what to do when it comes to Afghanistan or any other country. History has shown that overnight, thousands of people jump in and change the country’s demographics. Mr. Wahab Baloch said, since the independence of Pakistan, there have been two major problems, one of Kashmir and one of Afghanistan. Afghanistan has been facing problems for almost forty years. International forces withdraw from Afghanistan in 2020 Problems like hunger, poverty; law, and order are there at the moment. This seminar provided an opportunity to talk about the current situation in Afghanistan.

Concluding the seminar the Chairman of The Intellectual’s Forum Masood Noorani said, “I am grateful to all of you for your participation. Today we have discussed the Afghan issue in all possible aspects and I am sure that such gatherings do not happen every day. All credit goes to the intellectual forum. We are all one; we all are the owners of this country no one should be titled as the enemy.