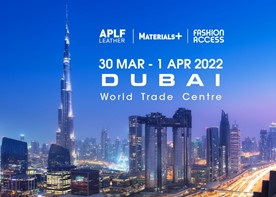 After a three years hiatus due to the Covid-19 pandemic, the world’s leading trade fair in Leather and Fashion made a triumphal return in Dubai World Trade Centre, from 30th March to 1st April, coinciding with the last few days of Expo2020. This was the first time in 35 years that APLF did not take place in its hometown Hong Kong. Needless to say that all the industry players were looking forward to this edition and its promising economic revival, leading to an atmosphere of high energy, cheerfulness and optimism during the three days of the show.

Pre-show expectations were tempered by the backdrop of the ongoing pandemic, travel restrictions in China and Southeast Asia as well as the Russia-Ukraine conflict had spawned more geopolitical uncertainty and wide-ranging economic sanctions.

Nevertheless, a total of 463 exhibitors from 34 countries and regions participated at APLF Leather, Material+ and Fashion Access, including first time participants from Uzbekistan from the leather sector, Georgia and Zimbabwe from the finished products sector. These were joined by over 6,000 buyers from 88 countries and regions. This is in line with the estimates of the Organisers despite the new venue and the extraordinary circumstances surrounding the timing of the event.

“We are grateful that APLF finally made it happen! This is an opportunity to meet new customers and Dubai may be the steppingstone to new markets, including Africa”, Dr Alessandro Lamura, Italy Deputy Trade Commissioner of the United Arab Emirates, said, speaking at the opening ceremony.

At the press conference, the APLF Organisers hosted the launch of the inaugural World Leather Day, 30 March 2022. This initiative was conceived by the Leather Working Group and Leather Naturally who recently joined forces as part of the renewed unity to promote and defend leather. This announcement also coincided with the 10th Anniversary of the Leather Naturally Campaign that has done so much to bring leading stakeholders of the industry together in a united front, supported by its highly original marketing arm Metcha.

During the critical stages of lockdown when global trade came to a grinding halt, the leather industry did not stay idle. It not only proved its resilience but also took the opportunity to develop new strategies. Sustainability and environmental issues which had become more important in the last decade took center stage as leading tanners launched branded sustainable leathers and introduced social responsibility into their corporate business model. This also included some machinery manufacturers such as the members of the Assomac (National Association of Italian Manufacturers of Footwear, Leather goods and tanning technologies) whose Industry 4.0 vision is to optimise the functioning and the maintenance of their machinery to improve its sustainability. “Our ultimate goal is to reach full circular economy,” said Assomac’s new President, Maria Vittoria Brustia.

Leather revival was also observed in some countries such as in India, Egypt, Uzbekistan and some parts of Africa where governments went the extra mile to support the sector. In India, import duty exemptions and a five-year Footwear and Leather Development Programme is expecting to double the export turnover to 10 billion USD by 2025-26 and the domestic industry turnover from 12 billion USD in 2019-20 to 20 billion USD by 2025-26, according to Sanjay Leekha, Chairman of the Council for Leather Exports, India.

Similarly, in Uzbekistan, tax exemption, the implementation of funds and the establishing of industrial zones are expected to increase the size of exports from 101 million USD in 2017 to 1.2 billion USD in 2026.

In Egypt, the relocation of tannery activities from the old downtown Cairo to Robbiki Leather City is expected to increase leather production, while controlling any adverse environmental effects. Similar relocation projects are planned in other regions of the country.

In Zimbabwe, the National Export Strategy is expected to stimulate the production and exportation of hides and skins, especially exotic ones.

With the leather industry in an expansion and development stage in many countries, APLF will continue to play a pivotal role by providing a global business platform for such countries, as it promotes the leather sector by actually being an integral part of it.

While the Russia-Ukraine conflict and consequent inflationary pressures sparked by rising energy costs will definitely impact the sector, the industry is sure to remain future-focused and prepared to meet demand during these challenging times.