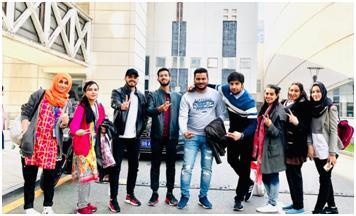 A 100-member youth delegation divided in four groups recently returned to Pakistan after successfully completing the tour of China under Prime Minister of Pakistan’s Kamyab Jawan Program. The delegation comprised of students belonging to NED University of Engineering & Technology, IBA, NUST, Khawaja Fareed University of Engineering and many other students from across the country along with some successful youth from different sectors including Punjab’s Minister Rai Taimoor Khan Bhatti and NED University’s students namely Bilal Ahmed Siddiqui, Ms.

According to details, the Pakistani youth toured Tianmain Square Forbidden City, Technology Innovation Center and City Sub Center Planning Exhibition, besides having the opportunity to witness the Chinese Culture, historical buildings, particularly the technological developments in artificial intelligence and Chin’s 2035 Plan for its own capital city. A musical night and opera performance was also arranged in honor of Pakistani youth delegates.

A Final Year student of Industrial & Manufacturing Department from NED University Bilal Ahmed Siddiqui, while touching upon some salient features and significance of delegation’s visit to China, commented that on completion of China Pakistan Economic Corridor (CPEC), the relations between Pakistan and China are likely to improve further hence, it is the need of the hour that youth from both the countries must carry out extensive studies of each other’s culture.

He noted that during the said visit, he found that Pakistani youth has absolutely no command over the Chinese language and same was the case with Chinese youth, resulting in a huge communication gap between the two nations. “Keeping in view the significance of CPEC project, there is a dire need that the inhabitants of both countries must have complete command on each other’s languages. It is really heartening to see that Pakistani and Chinese governments have taken the initiatives to offer Chinese language learning facilities in Pakistan and Urdu language learning facilities in China as well. I also observed at the Peking University in China that Chinese youth are formally learning Urdu language”, he added.

Bilal Ahmed Siddiqui said, “Being the members the first Group which visited China, we observed several initiatives taken by the Chinese government to eradicate poverty while the farmers were also being fully supported that led to expansion of their businesses.”

He was of the opinion that Prime Minister’s Kamyab Jawan Program clearly depicts government intention to make the youth self-reliant and it was for the very first time in the history of Pakistan that a National Youth Council was established purely on the basis of merit with representation from all over the country.

He said that China Pakistan Economic Corridor is a project of mutual cooperation and regional development, which would create abundant opportunities for the youth of both countries. The Pakistani youth delegation also had a meeting with Acting Vice President All China Youth Federation Li Kiung who admitted that Pakistan and China have been enjoying cordial relations and his country always supported Pakistan whenever needed.

Moreover, another Student of Master Program from NED University Ms. Hiba Lodhi commented that the China’s tour under Kamyab Jawan Program was very successful in which they realized that the fact that friendship between Pakistan and China was really very strong as they were warmly welcomed upon their to China.

She said that Chinese people were very hospitable as they not only shared the information but also took them to some of the most splendid places in China. Being punctual and disciplined, which is strictly adhered by everyone even small children, is another major reason behind the success of China. Such tours for the youth prove very beneficial hence these must regularly take place in future as well so that awareness about each other could be raised amongst the youth who could learn more from such experiences.

Amna Hassan, who was also part of the tour, also confirmed that the tour of China proved very useful for the youth and the host, China Youth Central Committee, undoubtedly proved themselves as an excellent host. The hospitality clearly indicated the Chinese love and affection for Pakistanis besides indicating that Pak-China friendship was not just confined to diplomatic statements but immense friendship exists amongst individuals as well. “Although we had some language issue in China and the culture is also different but one thing is common that both countries are very friendly, which is the basic reason why, despite having language difficulty, we never faced any kind of problems and kept visiting numerous sectors with any trouble”, she added.

She informed that the delegation also paid visited in connection with poverty alleviation along with tours to the Special Economic Zones, Small & Medium Enterprises and the Education Sector.

She was of the opinion that China particularly emphasizes on investing heavily in the Education Sector while the system of discipline is exemplary which is adhered by every single segment of society. Under the 20-years program, China’s urban planning is superb in which they treat the city as a district and all districts fall under Block and these blocks form just one area, of which one block has been allocated for national and international businesses while another block has been specifically designated as Administrative Office.