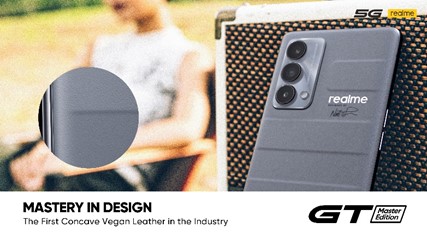 It is coming and it is ready to conquer – and believe us that realme GT Master Edition’s upcoming takeover of the Pakistani smartphone industry will be a lot swifter than that of Julius Caesar, who famously gloated ‘Veni, Vidi, Vici’ about his blistering military campaign in medieval Rome.The realme GT Master Edition is poised to take the market by storm and be a favourite for all gamers stuck with medieval gaming smartphones. Being heralded as “Smartphone of the Year”, it is powered by Qualcomm Snapdragon 778G 5G chipset coupled with GT Power. A true marvel of flagship technology, the realme GT Master Edition is purpose-built for gaming with a blazing fast performance like no other.

The smartphone shall prove to be the ultimate digital companion by best combining speed, efficiency, reliability and performance to usher in an unprecedented user experience of all times.

Gaming is one of the most significant aspect that factors in our decision to buy a smartphone. The realme GT Master Edition is literally a ‘game changer’ that completely transforms the gaming experience through its ultra-fast processor and innovative heat dissipation mechanism. realme offers the fastest 5G-enabled Qualcomm Snapdragon 778G Processor for lightning fast and smooth gaming experience and once you have a gaming experience on the GT Mode, no other device is going to be good enough for you.

realme is the only brand to offer a 5G-enabled 778G Qualcomm Snapdragon processor in this price bracket. The SD778G’s 6nm 5G chipset helps it clock blazing speeds as the smaller distance for transmission of data leads to swift processing as compared to its competition. With SD778G powering up the realme GT Master Edition, the most graphic heavy games will be ultra-responsive and breeze through like air to keep you way ahead in competitive gaming.

We seriously believe, this one feature alone could make the realme GT Master Edition an ultimate favourite of Pakistan’s gaming landscape. The phone effectively does away with the longstanding issue of throttling in other so-called gaming phones that has long taken the fun away from gamers. Ordinary phones easily heat up in absence of an efficient cooling system and slow down the processor, leading to lagging of the game.

The realme GT Master Edition comes with a large vapor chamber having an area of 1729.8mm², combining with a super large heatsink of an area of 13217mm², covering 100% of core heat sources. This significantly reduces the temperature and keeps the phone in a high-performance state.

With this efficient heat dissipation system, gamers would be able to keep playing well during the sweltering summer heat in Pakistan without a worry about the phone heating up.

The phone’s sleek and light design is ideal for binge gaming. The exquisite vegan leather cover on the Voyager Grey version, which is the first concave vegan leather in the industry, gives a comfortable feel due to its de-saturated and neutral characteristics for extended usage.

The phone is powered by a 4,300mAh battery and its 65W SuperDart Charge can charge the phone in just 33 minutes. It also supports flash charging while playing games that your phone can charge to 38% in an hour to give you an uninterrupted gaming experience.