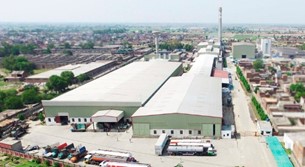 We reinstate coverage on TGL, one of the largest glass producers in Pakistan, with a Buy rating and June 2022 TP of PKR165/sh. We estimate a 5yr sales CAGR of c.16% for FY21-26f, supported by the recent c.50% increase in capacity, and rising glass consumption in Pakistan; while an oligopoly industry structure lends adequate pricing power.

A key attribute to like about TGL is that it has been less exposed to economic downturns than other construction industries. It has maintained gross margins around 19% in the past 5yrs – thanks to significant investment in plant capacity and efficiencies.

TGL trades at 4.7x P/E FY22f, which is 34% discount from previous 5yr average. Valuations are cheap compared to competitor GHGL that trades at a 5yr average of 12.4x. Expected deleveraging amid rising profitability also reduces its risk profile.

We reinstate coverage on Tariq Glass Ltd (TGL) – one of the largest producer of glass products in Pakistan – with a Buy rating and a June 2022 TP of PKR165/sh, offering a potential upside of 66% and FY22f dividend yield of c.13%. TGL manufactures Float glass, Tableware glass, and Opal glass, where it has 50% market share by production in Float glass and 55% share by capacity in Tableware glass. In the backdrop of rising glass consumption in Pakistan, TGL doubled it Float glass production capacity, from 550 tons per day to 1,050tpd, with the firing of Float Glass Plant Unit-II in April 2021. This underpins a 3yr Sales and Earnings CAGR of c.23% and 26% over FY21-24f. In the past, TGL also depicted low variability in its gross margins (around c.2ppt from 5yr mean of c.18%) across a full economic cycle, which is another key attribute to like, given the present monetary and fiscal tightening measures being instated in Pakistan.

Low variability in margins is a key attribute to like

Collectively TGL and Ghani Glass Ltd (GHGL) satisfy over 98% of domestic demand for float glass (near Oligopoly industry structure); hence they command strong pricing power, going by the low variability in TGL’s gross margins. This is despite fuel and power commanding 38% of total cost of production. Recent expansion of Float glass capacity should sustain margins over 20% in the medium term, because it will increase the share of float glass in the revenue mix to 66% by FY25 compared with 56% in FY21. Note that in the Tableware market TGL faces greater competition, but it has a strong brand equity owing to value-added investments. Having said that, three of TGL’s four glass furnaces (by turns) are slated to go offline between 2QFY22 and 1QFY23 for 4-6mths, which will lead to below-par earnings during these quarters, but these projects are essential for the company’s longevity and sustainable profitability.

Past performance speaks for a strong management

We highlight that TGL is among the few companies in IMS Universe which has had back-to-back expansion or BMR projects in the past seven years. By end of FY21, TGL has tripled its capacity, expanded into the more profitable business of float glass and has captive power to eliminate dependence on the national grid. At the same time, TGL’s debt to asset ratio has fallen to 44% in FY21 from c.60% in FY15. Therefore, it has had average ROCEs of c.17% since FY16 (except in Covid-affected FY20) against avg. WACC of c.12%, even though some projects had delayed completion. We expect ROCEs to average at 23% during FY22-25f.