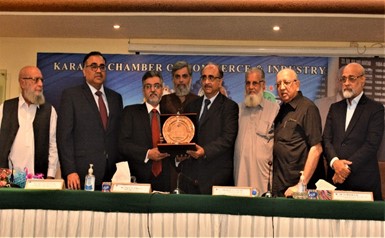 While congratulating the newly elected office bearers of KCCI upon assuming charge at a meeting held during the visit of delegation from Jamiyat Punjab Saudagran-e-Delhi, Tahir Khaliq hoped that the new office bearers of KCCI will give maximum time to the Chamber and work really hard to effectively deal with numerous issues. “Keeping in view the hard work and enthusiasm of exhibited by Muhammad Idrees from time to time in different capacities, I am sure he, as President, will again be able to deliver as per expectations”, he added.

General Secretary BMG AQ Khalil, in his remarks, highlighted the excellent social welfare initiatives taken by JPSD which was one of oldest institution registered in 1910 in Delhi but after partition, it was divided into two portions as many people belonging to Urdu speaking community migrated to Karachi and Lahore while some decided to stay in Delhi. “JPSD is undoubtedly one of the most organized institutions which has undertaken laudable projects for the welfare of its people, particularly the poor and needy segment of the community”, he added.

Keeping in view the strong ties between KCCI and JPSD, AQ Khalil was fairly optimistic that the relationship between the two institutions would continue to strengthen further and both would work collectively for resolving some of the most pressing issues being suffered by Karachi.

President JPSD Muhammad Saleem Farooqui, in his remarks, highlighted numerous initiatives taken by JPSD which has been providing free groceries to 600 families, providing public assistance to 9,000 individuals and has also completely revamped Urdu speaking Community’s hospitals in Liaquatabad and Delhi Colony Hospital where state-of-art-facilities were being provided to the community. “Free-of-cost dialysis facility is also being provided to 40 patients every day via 16 dialysis machines at these hospitals while 250 motorbikes were also given to the unemployed youth of the community so that they could stand on their feet.”

He also requested KCCI to help JPSD in availing tax exemptions from the provincial and federal tax collection authorities as JPSD, which was an NGO, provides welfare services to community with a vision to serve humanity.

Speaking on the occasion, President KCCI Muhammad Idrees stated that KCCI and JPSD have been enjoying excellent relations since many decades and it was really heartening to see that some of most prominent personalities of Urdu community have severed Karachi Chamber as Office Bearers who took practical, concrete and resulted-oriented steps during KCCI’s journey to success.

He assured to take up the tax exemption matters with tax authorities at federal and provincial level as institutions like JPSD who have been dedicatedly serving humanity must be provided tax exemptions.

He also extended full support and cooperation to Urdu speaking community in dealing with an issue being faced by them. “Any issue being faced may please be notified to this Chamber and we will make all-out efforts to get it resolved at the earliest.”