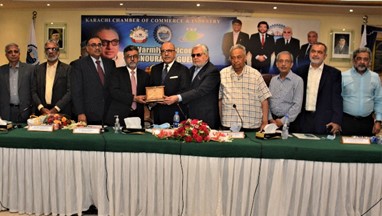 Chairman Sindh Revenue Board (SRB) Khalid Mehmood has said that SRB has been making cautious efforts all the time to ensure that the business community do not faces a situation in which they receive notices from FBR and also from SRB however, in case they receive notices from both the tax collecting authorities, SRB tries its best to resolve the issue as per aspirations of the taxpayers.

Speaking at a meeting during his visit to the Karachi Chamber of Commerce & Industry (KCCI), Chairman SRB said that the issuance of double notices and other issues are taken up regularly with FBR and usually resolved through deliberations. “Some progress has taken place in this regard while some issues are still pending and we are hoping that these will also be settled soon”, he added.

Khalid Mehmood said that sincere efforts were made to resolve the indenters issue whose tax was reduced from 13 percent to 3 percent yet, many indenters were still reluctant to pay tax and have gone into litigations. “If they (Indenters) have any other feasible option, it can be shared with SRB and we will take it into consideration”, he assured.

He said that point of sale measure was being taken to capture sales of restaurants, beauty parlors and other outlets where a large number of cash transactions were taking place. “In this regard, we will be requiring your cooperation as it will be a substantive move”, he added.

Chairman SRB said, “Instead of being a typically strict tax collecting authority, we try our best to make SRB a taxpayers’ friendly institution and we have succeeded in attaining this objective to a certain extent. Even in those matters in which there were differences between the SRB and the business community, we usually act leniently in terms of enforcement and the Board has been overall enjoying good relations with the business community of Karachi.”

“Any unwarranted notice received by members of the business community can be brought to SRB high-ups’ notice who are always available to listen to and amicably resolve the issues”, he added.

Chairman BMG Zubair Motiwala, while congratulating SRB Chairman on achieving record tax collection of Rs128 billion, stated that there was a huge potential for further growth as SRB has created an enabling and cordial environment in which the taxpayers were being facilitated as much as possible which was a very nice approach.

He stressed that out of a total revenue of Rs128 billion, Karachi must be contributing somewhere around Rs110 billion and out of this huge contribution, the Sindh government should look into the possibility of spending half of the amount on development of Karachi.

He further pointed out that the Worker Welfare Fund (WWF), which was either being submitted to SRB or FBR, was a serious issue that stands unresolved to date. Many taxpayers, who submit it to FBR, adjust WWF in Income Tax Returns but those taxpayers, who submit it to SRB, cannot carry out adjustment in IT returns. Hence, the SRB and FBR will have to sit together to deal with this issue as it puts the business community in confusing situation, he added.

He further stated that sales tax on Exports was not being charged anywhere around the world hence it should not be charged here as well because all the services including shipping lines and terminals operators etc. were being availed for exports. “SRB must also rationalize its tax rates in consultation with KCCI as there was plenty of space available in numerous sectors where the tax rate can either be reduced or enhanced”, he opined.

Vice Chairman BMG Haroon Farooki, in his remarks, stated that the business community faces a lot of problems and remains confused on various occasions when parallel taxes were being demanded by the FBR and SRB as well and both claim that these taxes fall under their domain. “This clash between the two tax collecting authorities puts legitimate taxpayers in a discomfortable position who sometimes even have to go to courts to settle the issues but it is high time that FBR and SRB must sit together to decide their domains in order to set the loyal taxpayers free from all the trouble”, he added.

He mentioned that taxation issues of indenters, security agencies and travels agents etc. have still not been addressed at SRB level which require attention.

Vice Chairman BMG Jawed Bilwani stressed that although Karachi contributes 95 percent revenue to SRB but sector-wise and city-wise breakup was unavailable. “SRB should look into the possibility of publicizing this important info so that we could examine the statistics and give inputs on where the tax rate needs to be enhanced and where it has to be reduced.”

President KCCI Muhammad Idrees, while welcoming Chairman SRB, stated that since Khalid Mehmood assumed charge, SRB’s revenue has been constantly increasing every year and it was heartening to see that most of the revenue was being contributed by the business & industrial community of Karachi. “We have no problem in contributing so much and we can contribute even more but the funds being generated from Karachi must be utilized on the infrastructure of this city which was in bad shape.”

He appreciated the support and cooperation being extended by Chairman SRB who has promptly resolved numerous issues highlighted by KCCI.