Skip to content
Home » Special attention will be paid to the affected areas, Vice Chairman KW&SB 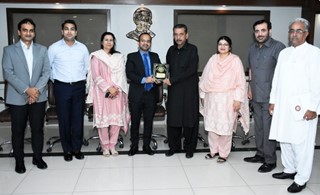 In connection with drainage, where there are more problems, special attention will be paid and new lines will be laid as required. These views were expressed by Najmi Alam, Vice Chairman, Karachi Water and Sewerage Board (KWSB) during a visit to the Korangi Association of Trade and Industry (KATI). KATI President Salman Aslam, Senior Vice President Maheen Salman, Vice President Syed Farrukh Qandhari, former Presidents Saleem-uz-Zaman, Zahid Saeed, Chairperson Standing Committee on Water & Sewerage Board Nighat Awan, and other members were present on the occasion.

But the problems are so many that it will take time to solve them. The reckless use and theft of water by the people are also causing more problems. Najmi Alam said that Water Board is taking all possible steps for the availability of water.

Earlier, KATI President Salman Aslam welcomed Najmi Alam, Vice Chairman, Water Board, on his arrival in KATI. He said that problems in Korangi industrial area are not solved permanently, while sewerage problems remain unsolved. The industrialists are running their own sewerage system in Sectors 23 and 24, without any cooperation from the Water Board.

President KATI further said that water was an important component for the industries and the government was bound to ensure uninterrupted supply of water to the industries but due to the negligence of the water board, the water received by the industries was being sold to them in the form of tankers. Industrialists are forced to buy tankers worth millions of rupees.

Chairperson Standing Committee on Water & Sewerage Board Nighat Awan said that the industrialists in Korangi Industrial Area took care of the renovation of roads and highways on their own, repaired the roads but there was no cooperation from the staff of Water Board and drainage including sewerage. Roads are also being damaged due to the problems of sewerage spill. She said that the Water Board should make it possible to supply water to the industrial areas on a priority basis and free the industries from the clutches of tanker mafias.

Former Presidents KATI Zahid Saeed and Saleem-uz-Zaman said that despite pointing out the problems, the staff and officers of the Water Board work reluctantly. They said that water and sewerage lines are 25 to 30 years old in which are now contaminated and are broken in many places. They said that due to contamination, stomach ailments like diarrhea are spreading and innocent children are suffering the most.