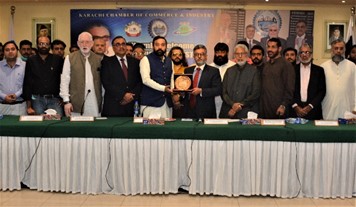 President Karachi Chamber of Commerce & Industry (KCCI) Muhammad Idrees, after listening to the grievances being faced by members of All City Tajir Ittehad (ACTI), assured that KCCI would take up all their issues with relevant departments and ensure that they do not have to go through any kind of harassment or injustice by the officers of Federal Investigation Agency (FIA) and Federal Board of Revenue (FBR).

“Any specific case pertaining to harassment by FIA or FBR officials must be referred to KCCI so that we could take it up with the higher authorities at these departments so that the hardships being faced by small traders and shopkeepers could be minimized”, he added while speaking at a meeting with a delegation from ACTI which was led by its President Hammad Poonawala.

President KCCI, while referring to concerns expressed by ACTI members over dilapidated road infrastructure of Karachi and the rising street crimes, stated that the Karachi Chamber was well cognizant of all these issues hence, these matters have already been discussed at a recent meeting in CM House with Chief Minister Sindh Murad Ali Shah and Administrator Karachi Murtaza Wahab who have also been invited at KCCI so that the infrastructure problems could be discussed in detail and the Sindh Government along with local administration could be convinced for devising a comprehensive plan of action for improvement and reconstruction of roads all over the city particularly in industrial areas where commuting has become impossible nowadays due to miserable road condition.

He further stated that the Karachi Police Chief Yaqoob Minhas, who recently visited KCCI, will once again be invited at KCCI for another meeting in which representatives of all associations will also be invited so that they could get an opportunity to effectively highlight their problems caused by rising street crimes.

He said that small traders and shopkeepers were no less and equally important to KCCI under BMG’s policy of ‘Public Service’ which was introduced by late Siraj Teli. “We will continue to dedicatedly serve and support small traders with same zeal and enthusiasm without any discrimination”, he added while paying glowing tribute to Chairman of Special Committee for Small Traders Majeed Memon who, despite being so aged, continues to work really hard for the wellbeing small traders and shopkeepers.

Chairman of KCCI’s Special Committee for Small Traders Majeed Memon advised President ACTI to give nominations of ACTI members so that they could be included in KCCI’s subcommittee for participation in numerous meetings where they will get a perfect opportunity to bring issues into limelight and also give suggestions on how to get them amicably resolved. “KCCI, being the actual representative of entire business community, is always there to extend full support and cooperation to small traders and shopkeepers who can approach this Chamber anytime for assistance”, he added.

President ACTI Hammad Poonawala, in his remarks, attributed the excellent coordination between KCCI and ACTI to the dedicated efforts and hard work being done by Majeed Memon who promptly responds to any issue being faced by small traders. He hoped that the cooperation and coordination between the two institutions would strengthen further in future which would certainly result in creating an enabling business environment for small traders who were an integral part of the economy.