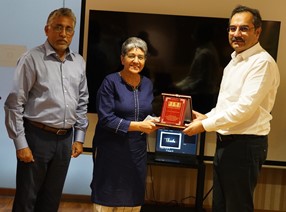 Pakistan’s Footwear Industry, last three years growth, can be evident that the sector has witnessed 92% import reduction in the finish goods and Local footwear manufacturers have taken up the share. At the same time, the footwear industry has experienced a 22 percent growth in footwear export in the last three years.

The footwear sector has conducted several meetings with the National Tariff Commission (NTC) and Ministry of Commerce Mr Abdul Razak Dawood to explore the full potential of the Footwear sector as an import substitute, which can bring a substantial increase in export and create employment opportunities. The main focus of the meetings was to strive every effort to make footwear sectors import substitute because three years back, the Footwear sector was importing 2.8 million pairs of shoe products. Still, they are importing only 1.6 million pairs of shoes and enhancing the footwear export according to the POLICY “Make in Pakistan”.

In continuation, PFMA invited NTC delegates to visit their office in Lahore to understand the industry better. The delegates also visited local Manufacturer and Raw material component manufacturers to develop an understanding of the industry and rationalize duties on Raw footwear material. Because some of the raw material is being utilized by other industries, duties are on the higher side and NTC needs to be better explained on this issue. The delegates were thoroughly explained each component of raw material used in the footwear industry, which needs to be rationalized to make our products more competitive in the international market.

On this occasion, PFMA Chairman Mr Zahid Hussain appreciated Government for reaching out to the industry; he further stated, “We have detailed discussion with the delegates on each raw material and shown them Industry processes and shared Footwear sector contemporary issues. This visit proved to be very productive for the industry as the Government made serious efforts to resolve industry issues. These visits pave the way for next year fiscal budget 2021-22 preparation in which PFMA and NTC will work together to introduce and implement industry-friendly policies and regulation to help increase the productivity and make products competitive”.

PFMA will be submitting Industry Budget proposals with NTC in the next month, followed by a series of meetings starting from Oct 2021 to formulate conducive footwear sector policies. The PFMA budget proposal will focus on reducing duties on raw materials of the footwear industry to make local products competitive in the international market.