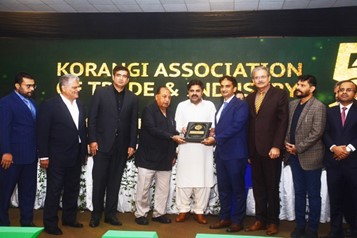 Minister of Local Government and Labor Sindh Syed Nasir Hussain Shah graced the KATI annual dinner yesterday in Karachi. The Sindh Minister has said that there will be no abuse in Mehran Town. All action is being taken on the orders of the court. The FIR is being registered, and many employees are nominated in it. The intention of the government is clear; we will not allow injustice to happen to anyone.

Sindh Local Government Minister Nasir Hussain Shah said that PPP Chairman Bilawal Bhutto Zardari has a unique directive to provide all possible facilities to the business community. However, the government also faces difficulties and problems. After many years, a memorandum of understanding has been signed on Solid Waste. After that, agreements were reached in all the districts of Karachi. There were no contracts before that, and hopefully by the end of October. Garbage will start to be picked up from Karachi, after which the complaints of waste not picked up will end.

Nasir Hussain Shah further said that the provincial government is working hard in its resources to complete several projects on time while most of the projects are still underway, including Malir Expressway.

Chairman PPP gave special instructions to Najmi Alam, Deputy Chairman, Water Board. The Sindh Local Government Minister said that there are other projects for water besides K4, which are being improved, desalination is being improved, and work on treatment plants is in progress. He said you should come forward and get the license to remove the third party from the middle.

Nasir Hussain Shah further said that he would visit KATI soon on the instructions of SM Muneer Bhai Jan. He welcomed KATI’s agreement on the Green Belt.

Earlier, KATI Patron-in-Chief SM Muneer said in his address that Saleem-uz-Zaman and his team had selflessly served KATI, and he has been the most successful President. KATI is working hard for industries, and KATI is the largest association in the industrial areas of Karachi.

SM Muneer said that KATI is the only association in Pakistan where women have ample opportunity to lead. Maheen Salman and Nighat Awan are the best examples of this.

He said that I would be going abroad in a few days, and then Zubair Chaya would be appointed in my absence while Zubair Tufail, President of United Business Group, would be the Acting Patron-in-Chief.

In his address, the Outgoing President of KATI, Saleem-uz-Zaman, said that under the leadership of SM Muneer, KATI had made great strides, and he is accountable for our performance. We’ve always talked about the industry, and we’re sure that if the industry works, people will get jobs. KATI faced many challenges as President. CEO Kite Zubair Chhaya gave his full support, Senior Vice President Zaki Sharif and Vice President Nighat Awan supported me in every task. In one year, 1010 complaints were received from KATI members, 97.7 percent were removed. Invited leaders and bureaucrats of various institutions, held more than 150 programs.

Saleem-uz-Zaman said that during COVID-19, we did our best to cope with it and set up a vaccination center that has vaccinated more than 80,000 people. We also set up a fire station with the help of the government. He said that the Sindh government should fix a minimum wage of Rs 20,000 like other provinces as industries could not afford extra wages. Saleem-uz-Zaman congratulated the newly elected President and assured his full cooperation.

On occasion, KITE CEO Zubair Chhaya said that he had brought the case of Mehran Town taking advantage of Provincial Minister Nasir Hussain Shah. There are cottage industries in different parts of the city, and more than 200,000 cottage industries are operating in Karachi, which is the backbone of the economy. The Mehran Town incident is a great tragedy, but the working class and employees should not be repeatedly punished for some people’s mistakes. The SBCA has cancelled the lease of 1401 plots, and it is feared that the industry will also be scrapped.

Zubair Chhaya said that in this way, the offices in the posh areas of Karachi should also be demolished. The lease of schools in residential areas should also be cancelled. If the government starts breaking in this way, then the whole of Karachi will be demolished. He said that the business community was ready to support the government; he suggested making former president KATI Sheikh Umar Rehan an advisor to CM so that the way could be opened for consultation between the government and the industrialists. 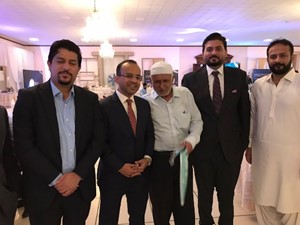 Addressing the function, the Newly Elected President of KATI, Salman Aslam, said that he was grateful to SM Muneer bhaijan and other members who elected me for the post. He said that he would do his best to solve the problems in consultation with his senior. Salman Aslam noted many industrial areas where gas, water, and salaries are at the top.

At the end of the ceremony, shields were distributed among the best performers. A cake was also cut on the completion of 50 years of KATI.