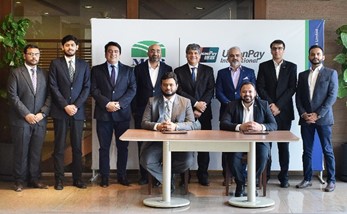 Under this agreement, MCB Bank will be enabling partner eCommerce businesses access to UnionPay International as a payment scheme in the MCB eGate internet payment gateway service. Going forward, all eCommerce businesses that utilize the MCB eGate service will be able to receive patronage from UnionPay International Debit and Credit Card holders who will now be able to conduct online payment transactions on their platforms.

Speaking at the occasion, Mr. Shahzad Ishaq said “at the heart of all our digital initiatives is enhancing customers’ access to payments, convenience and ease of doing transactions. Simultaneously, we would enrich the value proposition provided to Bank’s eCommerce merchants. Through our agreement with UnionPay International, our partnering eCommerce merchants stand to benefit from the potential business with over 12 million UnionPay cardholders in Pakistan.”

Mr. James Yang, General Manager UnionPay International Middle East, also added “UnionPay has the world’s largest cardholder base issued across 70 countries and regions. Providing security and effortless convenience for all of our customers is key when looking to the future. Supporting both merchants and consumers, UnionPay International invests significantly in technology and innovation to deliver a range of leading products, all adhering to the highest standards of security and protection.”