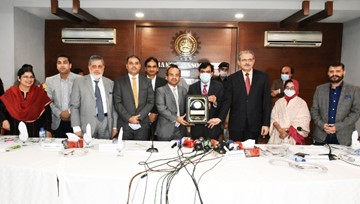 KATI is a very active association, which is playing an important role in industrial development. We were planning for a project of Urban Forest on Malir Naddi, since KATI has already worked on urban forest in Malir and Lyari Naddi which can be implemented immediately. These views were expressed by Commissioner Karachi Muhammad Iqbal Memon on the occasion of his visit to Korangi Association of Trade and Industry (KATI).

Commissioner Karachi Muhammad Iqbal Memon said that in view of the transfer of officers in Korangi, an agreement is possible between KATI which will not delay the work in case of transfer of officers. He said that he was very impressed with the arrival of KATI and how the industrialists of Karachi are working for the welfare and development of the country and the nation. Commissioner Karachi further said that encroachments from the city must be eliminated but KATI should formulate their recommendations regarding Mehran Town so that this issue can be resolved through consultation.

Earlier, KATI President Salman Aslam while welcoming Commissioner Karachi said that there are numerous problems of development works in Korangi. Korangi Industrial Area contributes Rupees 600 million to the exchequer on a daily basis but besides that there are countless problems in the Area. He said that Karachi needs to be transformed into a world class city. KATI considers it a national duty to assist in the construction and development of the city with all possible services to the industries and the business community. Private sector partnerships are essential for the betterment of city administrations. Salman Aslam said that Sindh government is working on many successful projects of private-public partnership in the fields of health and education. We suggest that this model needs to be adopted in the basic administrative institutions of Karachi as well. President KATI further said that the city administration should be given the powers of the concerned organizations and efforts should be made to link KMC, DMCs and other organizations on one page which would enhance the image of the city.

KITE CEO Zubair Chhaya said that Karachi has an important role in the national economy, Pakistan’s development is linked to Karachi’s development, but despite this Karachi was ignored. The problem of water in the industrial area has taken a serious turn. The performance of the water board is very disappointing. Water board should give water to the industries to their right, but the problems of roads and sewerage in Korangi industrial area are obvious to all. Zubair Chhaya said that institutions need to come on a platform, if industry is established in the country then there will be development, economic problems will be solved. He said that big decisions are needed for Karachi and special funds should be set up for Korangi DMC.

KATI Chairman Standing Committee on Mehran Town Masood Naqi said that there is lack of funding for development works of Korangi Industrial Area. The government should increase funding for the betterment of the area. He called for resolving the issues through consultation between KATI and the Commissioner’s Office.