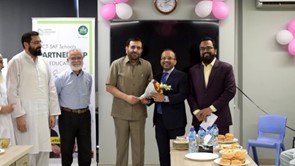 The Korangi Association of Trade and Industry (KATI) has announced a major partnership with the non-profit organization Green Crescent Trust (GCT) to participate in a trusted social services program. The official announcement was made by a delegation of Executive Committee members led by KATI President Salman Aslam during a visit to the Green Crescent Trust (GCT) head office. KATI and GCT officials have agreed to formally sign a memorandum of understanding to provide institutional support to a charitable campaign to provide quality education to children from poor families in Sindh.

Speaking on the occasion, KATI President Salman Aslam said that a meeting of the General Body would be convened soon in which the industrialists and traders of Korangi Industrial Area would be invited to participate in the GCT campaign. He said that KATI would co-operate with GCT to facilitate free soil testing in the construction of charitable school buildings across Sindh. President KATI said that in order to increase the literacy rate in the country, it was necessary for every individual to play a role in the promotion of education. In this regard, the importance of charities such as GCT is increasing which are providing free higher education to the children of poor families.

Salman Aslam further said that it is our responsibility to cooperate fully with welfare organizations like GCT to promote education in the country and in the future the administration of the country will be in the hands of skilled and professionally educated youth of the nation.

This is the first time that KATI will provide institutional support to a social organization in the field of education in Pakistan. Meanwhile, the patrons of both the institutions, SM Muneer and Sardar Yasin Malik, in their messages respectively, congratulated the two institutions on the announcement of a joint partnership for a common cause. At the event, KATI’s Patron Zubair Chhaya praised the GCT’s efforts in the education sector in Sindh and assured his personal and KATI full support for the Green Crescent Trust.

GCT CEO Zahid Saeed said that the welfare work has been going on for the last 27 years with the aim of educating the children of helpless and poor families in remote and marginal areas of Sindh. He said that GCT has a network of more than 155 charitable schools across Sindh in which more than 29,000 students are enrolled. He further said that according to vision 2025, GCT will increase the number of its schools to 250 in which more than 100,000 children from poor families will be admitted. Former President KATI Zahid Saeed further said that in order to fulfill the huge responsibility of enrolling out-of-school children in Sindh, we are collaborating with like-minded organizations including Shahid Afridi Foundation, ICNA Canada, JTQ, and others are included. He said that recently the President of Pakistan Dr. Arif Alvi had lauded the efforts of GCT in educating the children of needy families in Sindh.