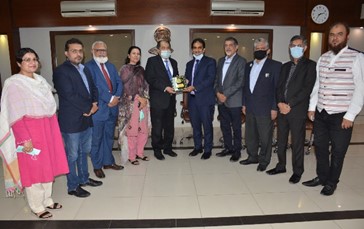 Consul General of Indonesia Totok Prianamto acknowledged that despite the challenging global economic situation due to Covid-19 pandemic economic and business environment in Pakistan is getting better. He was speaking to a gathering of Industrialists at Korangi Association of Trade & Industry (KATI) here on Thursday.

The CG informed KATI that to improve the bilateral trade with Pakistan, zero tariff facility has been provided for Pakistani products under a trade agreement. The Indonesian envoy said that to promote mutual progress and growth, we are offering zero tariffs for 20 items to Pakistan under a deliberation, part of a trade agreement between both countries finalized previous year. He said that due to coronavirus outbreak deliberation on Free Trade Agreement between Pakistan and Indonesia have been halted, and it is expected that discussions on the FTA would continue soon. He also said that business interactions had been directly affected by the pandemic; we are expecting that visa issuance would resume quickly.

President KATI Saleem-uz-Zaman briefed consul general regarding the economic significance of Korangi Industrial Area. He said that cordial relations between the two countries are a national asset for us. He said that in fruit, Palm oil, leather and other traditional exports to Indonesia can be enhanced more while there is need to explore some new arenas for stronger relations between the two countries. Head of KATIs Standing Committee on Diplomatic affairs Masood Naqi said that Pakistan and Indonesia share a profound cultural and social bond however there is a need to expend the bilateral trade between brotherly countries. He underscored the necessity of comprehensive strategy to strengthen trade and business relations and for sharing useful suggestion to meet the task of mutual growth. Consul for economic affairs of Indonesian consulate general Ibnu Sulhan, former chairman of KATI Ehtisham Uddin, Faraz-ur-Rehman, Maheen Salman, Junaid Naqi and others also attended the meeting.