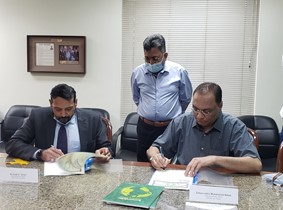 The MoU was signed at the Company’s headoffice at Port Qasim, by the Chief Executives’ of IMC and KeH, Ali Asghar Jamali and Zaheeruddin Muhammad Babar, respectively.

Since 2016, IMC has been extending psychiatric medical services – free of cost – to the underserved communities. In a country of 220 million, there are only five specialized mental institutions or one psychiatrist for 500,000 people. KeH has for the last almost four decades been at the fore-front in providing quality psychiatric and rehabilitation services to the most neglected, mentally ill patients in Pakistan, at no cost.

Ali Asghar Jamali, IMC’s Chief Executive, expressed, “Mental health is the most neglected and under-served area of public health. Clearly, the dearth of basic understanding of psychiatric disorders coupled with the social stigma attached to it,sadly prevents people from seeking the care they need.”

He added saying, “I congratulate Mr Zaheeruddin Babar for the wonderful work Karwan e Hayat is doing under his command. I am confident that this collaboration with the experts at KeH, will help fill the gap in not only reaching out to the under privileged communities we serve but also educating them on the importance of mental health in the same way as we care for our physical health.”

Chief Executive KeH, Zaheeruddin Babar said on the occasion, “It’s a myth that psychiatric ill health affects the lower socio-economic segment of society more, compared to those on the other side of the spectrum. Both are equally affected. KeH with the country’s largest psychiatric care hospital and its expanding network, is committed to serve the country for a brighter future.”