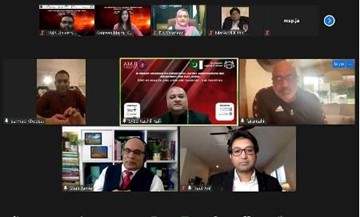 ILMA accomplished a remarkable feat as it hosted a one of its kind 2nd International Conference on Emerging Trends in Media, Films & Journalism. This star-studded event was organized by the Faculty of Media & Design spearheaded by Dr Yasmeen Sultana. The aim was to bring to the surface, discuss and propound on topics related to the impact and influences of media-related domains.

There were rich contributions from the keynote speakers which charted out the media landscape. Mr. Faran Tahir spoke about adding value through media and translating Pakistan’s rich literary heritage onto the big screen. Mr. Sarmad discussed how story telling was essential for movie making. Dr. Rauf Arif enlightened about the digital transformation and tech-based tools available in media. Mr. Shafi Naqi commented on the essential aspect in order to move forward that news should be weighed properly. Hence, it was truly incredible to have these insights from the gurus in this field who could actually uplift the role and status of media globally.

All the media related academicians, researchers, actors, writers, directors converged on this international platform and inspired the attendees with their inspirational speeches plus presentations. ILMA was able to reach out in an influential way through this mega-conference to guide and mentor youth towards limitless options in these fields of study and work worldwide.