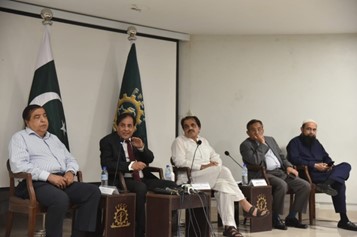 Mian Nasser Hyatt Maggo, President FPCCI, while addressing the post-budget press conference in the Federation House, Karachi said that our proposed tax model sent to Prime Minister, Finance Minister and FBR was based on simple, fair and predictable tax system: 10% income tax on individuals and AoPs; 20% income tax on companies; single-stage 5% sales tax (for exporters zero percent tax); low rate customs duty (one chapter, one rate 5%) on all items (with 15-20% tariff protection for local industry) and FED only on luxury & hazardous products.

The directions issued by Prime Minister to FBR to examine the FPCCI proposals in terms of agreed, non-agreed and partially-agreed proposals sent by FPCCI; but, were not responded by FBR. The follow-up two meetings were held with Finance Minister and FBR in which it was assured that budgetary suggestions along with the tax model presented by FPCCI would merit the consideration. However, the suggestions of FPCCI have not been incorporated in the budget; while, certain measures announced in the budget are partly reflective of FPCCI’s proposals.

Mian Nasser Hyatt Maggo highlighted the gravity of the issues arising due to introduction of Section 203A and that too in the presence of already available provisions being overlooked in this regard by the means of Section 192A and other appropriate associated sections with regards to inevitable need to arrest the taxpayer on account of civil liability. He asked for deletion of this provision on immediate basis to put the agitating businessmen at rest.

On the issue of inclusion of retailers in definition of smuggling, Mian Nasser Hyatt Maggo said that better and effective enforcement to disable the supply of smuggled goods to retailers is required; instead of leaving the retailers at the mercy of inspection agencies/FBR.

The President FPCCI also demanded withdrawal of proposed Section 127 of Income Tax Ordinance 2001; which has made filing of appeal contingent upon depositing 100% disputed tax amount – which is against the right to fair trial in terms of Section 10A of the Constitution of Islamic Republic of Pakistan that guarantees a person to be entitled to fair trial and due process. He also proposed to omit the Section 140 in the field of income ordinance by which FBR will be entitled to withdraw initial stage disputed amount from taxpayer’s bank accounts; which does not provide the determined civil rights and obligations for a fair trial and due process.

Mian Nasser Hyatt Maggo informed that the new introduction of penalties and confiscation of goods due to not accompanying invoice list in the container does not match with the ongoing claims of excluding human interaction in clearance of goods and payment of taxes. He further said that the present trade includes different destinations of negotiations and transshipments and origins of goods; in which the process and procedure of exporting destination may not accommodate such provision of putting invoice in the containers; hence, this proposal in the budget should be withdrawn.

FPCCI also demanded that the tax audit by 3rd party may be proposed in the statutes with pre-determined audit parameters and mechanism to ensure transparency and exclusive to market and FBR interest. President FPCCI proposed that office of FTO may be considered to be assigned 3rd party tax audit – as FTO is exclusive to any market interest because it is a constitutional office – on one-time basis assuring the transparency in conducting the tax matters of taxpayers aggrieved at the hands of tax officials.

Mr. Nasir Khan, Vice President FPCCI, demanded that Schedule 6th and 8th should be reviewed for restoring the exemptions on food items; which is also objective of the present government to reduce the food inflation by fiscal measures. Mr. Nasir Khan further said that distortions in sales tax treatment in respect of plant and machinery for different industrial sectors should be done away with and all the plant and machinery for production should be exempted from sales tax. While discussing FATA & PATA exemptions, Mr. Nasir Khan said that the mechanism of exemptions should be structured in such a way that exempted goods may not become another source of smuggling to the tariff area. He further discussed Section 8B of STA and said that the adjustment of 100% should be allowed in an indiscriminate manner; as presently it is proposed to be allowed specific to listed and non-listed companies; earlier it was allowed for few companies and specific sectors. This is not fair and infringes on facilitating at parity treatment to trade across the board. He also suggested adopting automated issuance of exemption in the WeBOC and National Single Window to facilitate exports as given in the case of issuance of exemption certificates automatically.

While discussing the CNIC, Mr. Zakaria Usman, former President FPCCI & Convener FPCCI Budget Committee, said that the wrong decision of imposition of CNIC conditions on sale has been counterproductive resulting in misuse of CNIC and development of fake and flying invoices culture. Moreover, Member Operation FBR informed that due to this condition there has been shortfall in sales tax collection. This is not the way of broadening the tax and hence should be withdrawn in order to increase unconcealed business activities.

FPCCI reiterates abolishment of withholding taxes and remains proponent of income tax on the income as presently major taxes are collected by withholding taxes instead of using efforts of big work force of FBR.

FPCCI strongly demanded FBR to share Draft list of proposed Additional Custom Duty, Regulatory Duty and other “ifs and buts” proposed in the Draft SROs; so that, before their issuance anomalies can be arrested. Mian Nasser Hyatt Maggo said that the present tax system negates the constitutional requirements; whereby tax judicial function has to be independent and separate from tax collecting machinery; so that, constitutional obligation is complied with. He further informed that FPCCI has written to Chief Justice of Pakistan to take cognizance of ongoing violation of constitution in taxation affairs conducted by FBR. He also said that stock of anomalies from last year remained to be resolved due to not including the raw materials used in manufacturing in part II of 12th Schedule of Section 48 of ITO 2001; which should be ensured for inclusion in budget 2021-22.